If Griffin Genier’s high school career were described as a single hole of golf, his play in the last couple of weeks would mean it was a birdie. 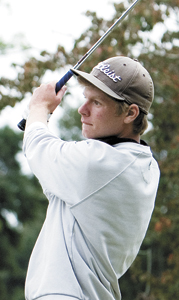 Nansemond River High School senior No. 1 golfer Griffin Genier ended his high school career with a bang, punctuated locally by his winning the regional tournament as an individual at Sleepy Hole Golf Course.

Yes, the Virginia High School League’s realignment has meant there were fewer and smaller schools to face at the regional tournament, but Nansemond River High School senior Genier was stellar nonetheless.

After easily finishing as medalist in the Ironclad Conference tournament, the Warriors’ No. 1 golfer faced a challenging field at regionals with heavy wind and a difficult course set-up. But Genier pushed through undaunted, shooting a two-over 74 in round one and a 77 in round two to win by six strokes.

“It was a big moment for me to win like that,” Genier said.

This performance at Sleepy Hole Golf Course made him a state qualifier for the first time and led to his nomination and win as the Duke Automotive-Suffolk News-Herald Player of the Week.

Though it happened outside of the poll’s nomination period, it is worth noting Genier continued his strong play at states and tied for second place.

The journey leading to this success started when Genier was about 4 years old. His father, Glenn Genier, had been playing seriously in tournaments since 1980 with a group of about 10 other friends.

“I got him a set of plastic clubs, and he just started banging them in the backyard,” the elder Genier said.

Glenn Genier would take his son to the golf course, so he knew what to mimic at home. In young Griffin’s hands, his sister’s electric Jeep became a golf cart, and he drove across the neighbor’s fenceless yards, taking one shot after another.

“I’ve learned the game through my dad, and he’s helped me out a lot,” Griffin Genier said. “By the time I was six or seven, I was on the course with him.”

The course would frequently be Sleepy Hole or Duck Woods Country Club. His father does not take much credit for honing his son’s playing ability to the point it is at now, but said he did make the effort to teach his son proper courtesy and etiquette on the course.

Griffin Genier played other sports early on, as well, including Pop Warner football and baseball in Bennett’s Creek Little League. However, he eventually became exclusive to golf.

“Once I won my first tournament when I was 10, that’s when I started going into the game even more,” he said.

Glenn Genier said his son always had a decent swing, but it was when he started winning Virginia State Golf Association tourneys in 2008 and 2009 that he realized his son had significant talent.

Griffin Genier said he loves golf because “it’s one of the more difficult sports that you can play.” He noted you can never really master it.

Almost every weekend he accompanies his dad and some friends to play golf together, a tradition Griffin Genier cherishes. “It’s nothing but a great time,” he said.

“Once he was 14, he started competing with us (in tournaments),” Glenn Genier said.

When it comes down to it, his family’s support is what motivates him to give his all on the course, “just to kind of represent them well,” he said.

Getting to see his son win regionals, Glenn Genier said, “It was fun. I really enjoyed it. I was glad for him.”

Glenn Genier said, “He’s put in a lot of hard work and for that to happen, it kind of testified for him.”

Also proud of him was his instructor of the past few years, Brian Liebler, Head PGA Golf Professional at Duck Woods. He praised his pupil for being very smart, a quick learner and having a great attitude.

“The scariest thing about Griffin is I think Griffin hasn’t even reached his full potential,” Liebler said.

He said the sky is the limit for him as he continues to improve rapidly.

Griffin Genier plans to play in college, though he does not know where yet.