There is an unprecedented youth movement going on within the Virginia Tech football program this year, and a familiar face from King’s Fork High School is in the midst of it.

The Hokies have played 10 true freshmen this year, the most ever under head coach Frank Beamer, and former Bulldog Chuck Clark is one of them. 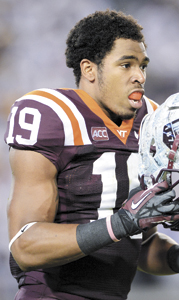 Virginia Tech true freshman safety Charles Clark has picked up where he left off at King’s Fork High School. His play has impressed coaches, leading to a starting role on special teams and even play on defensive snaps.

He is a starter on three different special teams units: the punt team, punt return team and the kickoff team. On the punt team, he serves as the gunner, the player who races down the field to tackle the returner.

Clark said a lot of people may overlook special teams, but he’s putting in the effort to make the most of his opportunities. “I’m trying to get out there and make a play so the coaches know,” he said.

King’s Fork head coach Joe Jones, a former Hokie, has spoken to the coaches, and they do seem to know.

“They have a lot of big expectations for him and high hopes,” Jones said. “They believe he’s going to be a vital cog on their team and on their defense over the next three years.”

Bryan “BJ” Johnston is the associate director of athletics communications at Virginia Tech, and he said when it comes to true freshmen, “If they’re going to play, they make their mark on special teams.”

The strong tackling ability Clark has demonstrated is why he got moved to the kickoff team.

He has also gotten time playing defense in several different games, totaling 21 snaps. Twelve of them came in a 17-10 victory over Georgia Tech, six in a 45-3 win over Western Carolina University and three in a 27-17 victory against the University of North Carolina.

He has come in as part of a pre-existing package where his presence adds another defensive back to the scheme.

Clark admitted he was surprised at getting defensive snaps so early in his career, “especially in the Georgia Tech game,” but at the same time, he said it was not a surprise “because you want it.”

Joining the team back in July, Clark was not sure how much playing time he would see and was inclined to think he would redshirt this year. Redshirting means a student-athlete will enroll at the start of a school’s athletic year and will practice but not compete in games.

One reason a player would do this is to give him time to add size and strength, develop and learn the system.

Hungry for playing time, however, Clark was pleased when this did not end up happening.

Somebody else who has been pleased is renowned defensive coordinator Bud Foster, who has made molding nationally-ranked defenses an annual tradition.

“I’ve been extremely impressed with Chuck,” Foster said. “He’s a very serious-minded guy who comes to work every day wanting to learn and grow. He’s working hard and developing each week. He’s been great on special teams and I think he’s got a bright, bright future. Right now he’s played a little bit of nickel for us, but he’s a safety/nickel guy who’s a dynamic football player … He’s exceeded my expectations as a true freshman, and I’m excited about his future.”

Jones said, “That speaks volumes there because (Foster’s) one of the best in the business.”

After hearing those words from Foster, Clark said, “That means a lot just because the type of coach Bud is. I didn’t even know he had said that, but that’s big right there.”

Clark made it clear he won’t let it go to his head, though.

His motivation to continue working hard and go all-out stems from thoughts of home, not wanting to let people down.

“Nobody wants to come back home and say, ‘I got sent home,’” he said.

This past week, the Hokies had a bye, so Clark was able to come home and watch his former Bulldogs teammates defeat Nansemond River High School on Friday night. But he will be back in action next Saturday at 3:30 p.m. when Virginia Tech hosts Duke University at Lane Stadium in Blacksburg.