The collectors at Saturday’s Peanut Pals swap meet got into collecting Planters Peanuts memorabilia in a number of different ways. 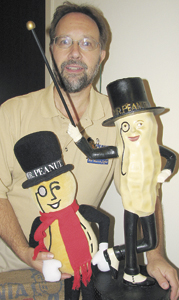 Peanut Pals Vice President Scott Schmitz is pictured with the bookends of his price range — a plush Mr. Peanut priced at $5 and a Mr. Peanut window-tapper, for which he was asking $25,000.

Some came across one old tin in their parents’ basement, and that old tin has now multiplied into hundreds of pieces of memorabilia from the company.

Several grew up in Wilkes-Barre, Pa., where Amedeo Obici started the company before moving its processing operations to Suffolk 100 years ago to be closer to the peanut growers.

Some, like Francis Elick, acquired their interest in the company because they used to work there.

“I’m just starting my collection,” he said, showing off a Mr. Peanut mug he acquired at the swap meet.

The swap meet, which was open to the public, was part of the Peanut Pals annual convention. The Peanut Pals are a nonprofit group dedicated to collecting Planters and Mr. Peanut memorabilia.

Following the swap meet at the Suffolk Center for Cultural Arts, the group also had lunch there, followed by a visit to the exhibit of memorabilia at the museum, a tour of founder Amedeo Obici’s mansion on Sleepy Hole Golf Course in North Suffolk and an informal night session with a presentation by three nephews of Antonio Gentile, who as a Suffolk schoolboy won a contest to create an advertising mascot for Planters with his early rendition of Mr. Peanut.

The swap meet featured coloring books for $2 — some of which were snagged by Suffolk historian Kermit Hobbs — all the way up to a mechanical window-tapping Mr. Peanut with a price tag of $25,000.

Scott Schmitz of Maryland, vice president of the organization, brought the window tapper and wound up packing him up at the end of the day. The device used to sit inside Planters stores and tap to attract the attention of passers-by.

The window-tapper is so expensive, he said, because only about 14 or 15 are still known to exist. 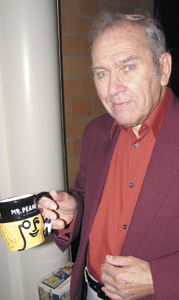 When Standard Brands bought the company, the trademark to the old-style Mr. Peanut — as opposed to the new, cartoonish version — was not transferred, he explained. So Planters ordered its employees to destroy any Mr. Peanut products, and they went into stores with sledgehammers smashing anything they could find.

However, some Planters store owners got wind of the situation before the sledgehammers could pay a visit and stashed away items in basements and car trunks.

“The things that came out of the stores are probably the hardest things to find,” Schmitz said.

Even so, a wide variety of items exist today as a result of Obici’s marketing genius. Coin banks, baby rattles, toy trucks, toothpicks, rubber hand puppets, peanut butter makers, wine glasses and more, all adorned with Mr. Peanut’s image, were up for grabs at the swap meet.

Sixteen-year-old Jerry Russin Jr. and his father drove 12 hours from Vermont to visit the convention. Russin first got interested when he found a Planters tin filled with nuts and bolts in his parents’ garage. That was about four years ago.

“I started buying a few things,” he said, explaining he sometimes earns money working for a neighbor. “I set aside a bunch of money for this convention. Every once in a while, depending on how expensive the item is, mom and dad step in — especially if they like it, too.”

Among Russin’s loot from the swap meet was a set of paper hats worn by employees in the stores and a scale used in a store.

“I think the scale is my favorite,” he said.

Schmitz said the Peanut Pals group enjoys collecting not just Mr. Peanut memorabilia but anything having to do with Planters.

“It’s not just all about Mr. Peanut,” he said. “We really get into the aura of the whole company. It was a well-run company.”

The exhibit of memorabilia at the center, 110 W. Finney Ave., remains on display through Nov. 2. The majority of it comes from Schmitz’s collection.

It is free and open to the public Tuesdays through Saturdays from 11 a.m. to 4 p.m.