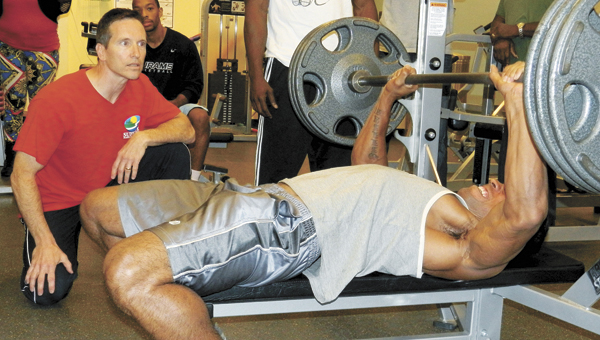 Ever since the East Suffolk Recreation Center opened in 2009, Suffolk Parks and Recreation has held a bench press competition there. This year was no different as a group of men gathered on Thursday evening in the fitness center to pump some iron.

For many of them, bulging biceps made it clear they were not new to weight lifting, but the competition included participants with a wide diversity of experience and age across three different weight classes.

“I was pleased,” he said. “It was actually a pretty good turn out this time.”

The group included eight men, some of whom were regulars at the center, but Frickanisce said, “We had a couple people that have never been here before.”

Suffolk’s Frank Baylor Jr., 28, came out because he respects a challenge and “just wanted to see where I would place.”

For some, Frickanisce himself was the one who gave them the push to compete. Forty-seven-year-old Anthony Baker of Suffolk said that is what motivated him to come out. “I’m going to do it just for fun,” he said beforehand. “I like working out.”

Frickanisce said the goal of both Parks and Recreation and the East Suffolk Recreation Center is to offer physical activity opportunities, but the competition provides local weight lifters with something more.

“This gives them something to sort of work towards also and another way to keep them motivated and keep them moving,” he said.

Roger Taylor of Suffolk, 47, said he has lifted weights since he was 15 years old. However, the opportunity to compete in a bench press contest had not presented itself since he was in the Marine Corps, “so, this was a refreshing thing,” he said of Thursday’s competition.

Taylor was a force in the 199- to 242-pound weight class, but the winner proved to be 30-year-old Jerome Mizell, who successfully bench pressed 410 pounds.

“I feel good,” he said after the accomplishment.

Though he now lives in Smithfield, he used to reside in Suffolk, and his strength was something others were aware of.

“Jerome’s been coming around for a long time, and everybody who was in that weight class pretty much knew they would need to bench more than 405,” Frickanisce said.

Mizell said he has lifted for five years and his personal best is 450, but he did not come into the competition over-confident. “I thought somebody was probably going to give me a run,” he said.

Each participant was given three lifts on Thursday, and Taylor ended up topping out at 405 for second in the class, while Baker lifted 300 for third.

In the 166- to 198-pound weight class, 28-year-old William Goldberg of Suffolk was victorious, lifting 330 pounds.

Frickanisce said several years back, Goldberg decided weight lifting was how he was going to get himself in shape. The decision helped him realize he needed to change the way he eats, as well.

Goldberg said, “I’ve been lifting weights for five years straight, non-stop, and I started off lifting 185, and I worked my way up, and I enjoy working out.”

He has been in each of the bench press competitions since 2009, and Frickanisce said, “He has really transformed his body over the years,” becoming both lighter and stronger.

Baylor said he has been lifting for about two years.

Frickanisce said, “Antonio’s a guy who’s come a long way too, and he’s been working very hard over the past year,” getting ready to join the military in less than a month.

Considering the contest overall, Frickanisce said, “What I get out of it most, personally, is to see how excited they actually get about the competition and how supportive they are of each other.”

The competition was originally meant for both men and women, but Frickanisce said only one year have women shown up to compete. While lifting is extremely popular with women, he said they have yet to get into bench pressing.