A dinner at the Norfolk Waterside Marriott Thursday will raise money to help minority students who wish to become physicians. 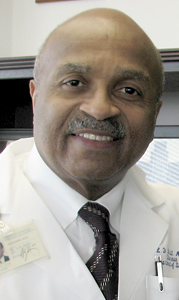 L.D. Britt is the Brickhouse Professor and Chairman at Eastern Virginia Medical School’s Department of Surgery.

With money raised from supporters, and through events like Thursday’s dinner, by the L.D. Britt, MD Scholarship Committee, the fund operates as a self-sustaining, endowed scholarship.

“It has always been our goal to have the scholarship be able to be given out in perpetuity,” Britt stated in a news release.

“I’m thrilled that the Hampton Roads community has supported this goal.”

A scholarship is awarded to one minority in each year of the four-year medical program, with the amount of support based on the fund’s principal balance.

“At this point, each scholarship is expected to be $10,000,” the release states. “The L.D. Britt, MD Scholarship Fund has become a permanent source of support for promising minority medical students thanks to contributions from the community.”

Racial and ethnic minorities will make up half the U.S. population by 2025, but they comprise only 6 percent of practicing physicians today, the release states.

The 18th annual event at the Norfolk Waterside Marriott Hotel, 235 E. Main St., starts at 7 p.m. This year’s guest speaker is Judge John Charles Thomas, who in 1983 became the first African-American and the youngest individual of any race appointed to the Supreme Court of Virginia.

He received the NAACP’s Lifetime Image Award in 1995, and these days practices law in Richmond with the Hunton & Williams LLP law firm.

Register online for the charity dinner at www.ldbrittmdscholarshipfund.org.