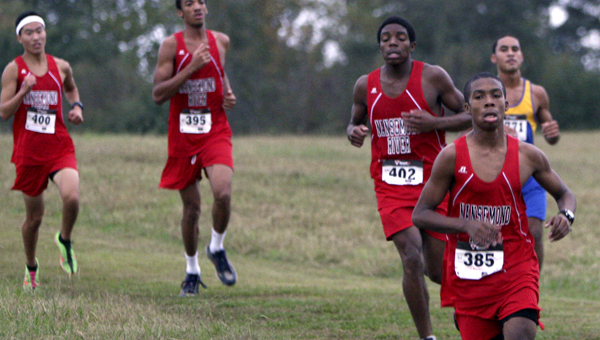 Paul Hall leads a pack of Nansemond River High School teammates during Tuesday’s conference meet at Bells Mill Park. The school’s boys’ and girls’ teams won in what was a warm-up for next week’s conference tourney.

Nansemond River High School’s cross-country team has established itself this season as the team to beat in Suffolk, consistently placing above Lakeland and King’s Fork high schools in district meets.

This becomes more significant in the context of the Ironclad Conference, where the field of schools shrinks from 10, many of which are much larger, to six of like size.

Warriors head coach Kurt Straub summed up his team’s 2013 performance thus far. “During the season they’ve come a long way, and we knew going into this new conference that things were going to be totally different.”

Tuesday’s first conference meet at Bells Mill Park functioned as somewhat of a warm-up for next week’s conference tournament, but Nansemond River’s boys’ and girls’ teams both placed first. 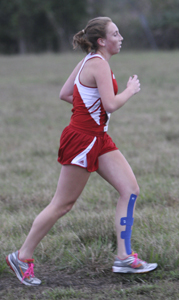 Straub did not see it as a reliable indicator for how things will go next week, though, and made it clear he is seeking improvement from previous performances in meets.

“We’ve been up there, but not where we should be,” he said. “We have a lot of work to do before next Tuesday.”

He has high expectations, but his roster of experienced and young runners has given him reason for them.

On the girls’ team, Straub’s five fastest include a senior, junior and three freshmen. Senior Kara Dixon leads the group, but her times have fluctuated significantly. She posted a 21:46.16 time on Oct. 8, but only managed 22:31.72 on Tuesday, coming in second among female runners, individually.

Straub does not question her drive, however. “Her work ethic is crazy,” he said.

She was not happy with her latest results, but he said, “It’s a pre-conference meet, so she gets one more shot.”

Junior Courtney James is Straub’s No. 2 runner, but she caught a cramp yesterday and Straub pulled her out halfway through the race.

She shows promise at the meets, but Straub said, “She just has to pace it right.”

He explained the first mile at Bells Mill Park is fairly flat, but shortly thereafter the track moves some distance away from the starting point into hilly territory.

“You can coach them in the beginning, but then they’re by themselves for a good mile,” Straub said. “They have to already be pre-coached on how to keep their composure.”

Freshman Casey Williams rounds out the top three girls, producing times in the low 23s. Her time of 23:13.31 was good for third on Tuesday.

Straub said Davis “runs track, and he does it year around, so his form has gotten a lot better.” He generally hits times in the mid 18s, though he was slower on Tuesday, placing seventh with a time of 19:03.46.

Gill came in fourth, producing an 18:46.32 effort, which is on the low end of his current range.

Straub said he has been surprised by Gill, who is brand new to running. He is more established as a baseball player but has been among the team’s top three runners all year.

Both Heyman and Warren have running experience and compete for the No. 3 spot on the team. Heyman had one of his best runs on Tuesday, breaking 18 to place sixth. Warren finished a ways back with a 20:22.25 time.

Overall, Straub saw this week’s conference meet as a wake-up call for his runners.

“I want to see their times drop at least another 15 to 20 seconds by next Tuesday,” he said.

He see the realignment as a positive thing for Nansemond River cross-country.

“Honestly, it makes us more competitive,” he said. “It makes the kids actually strive for something.”

The challenge for the Warriors will be “just staying calm,” Straub said.

A conference meet features a drastically reduced field of runners from district meets, which can mean a significant mental adjustment for competitors.

Additionally, Straub said, “A lot of those other teams, they have sprinters on their teams, so they’re going to go out faster.”

Consequently, they will have to remain strong and steady, regardless of the circumstances.

Nansemond River will be out in force next Tuesday at Bells Mill Field for the Ironclad Conference tourney.