EDITOR’S NOTE: Three people — Raleigh Isaacs Sr., Aaron Johnson and Jen Pond — are running for election to the office of sheriff of the city of Suffolk on Nov. 5. This is the second in a three-part series of profiles of the candidates, which will continues today and Friday in the Suffolk News-Herald. The stories will appear in alphabetical order of the candidates’ last names. A story about Isaacs appeared in Wednesday’s edition.

Sheriff candidate Aaron Johnson believes he can bring change to the office if he is elected on Nov. 5.

Johnson has worked for the last 10 years in the Newport News Sheriff’s Office, where he has handled responsibilities such as court security, civil processing, working at the jail and community relations. Before that, he did volunteer work for the Newport News Police Department.

He holds a degree in administration of justice from Thomas Nelson Community College. 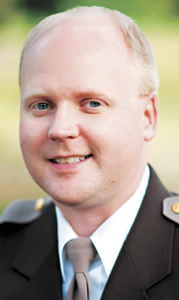 “I decided three years ago this is what I wanted to do,” Johnson said of running for election this year. “A lot of people agree that it is time for a change. When you’re in office that long, you get complacent.”

He referred to incumbent Raleigh Isaacs, who first took office in 1994 and is running for re-election.

“I didn’t know who was running,” Johnson said. “I just decided this is what I was going to start looking into.”

Johnson believes he can bring a fresh perspective to the office.

“You’ve got to be willing to explore some other options and look at things a little bit differently,” he said. “I’ve had experience with some of the newer things that are out there versus the old-school ways.”

Johnson says his top priority if he’s elected will be community outreach.

He said he wants the sheriff’s office to do welfare checks on seniors who live alone every couple of days.

“My hope is to put in place a program where we call and make sure they’re OK,” he said. “It doesn’t cost the sheriff’s office anything to pick up the phone and call somebody. It’s a free, easy program we can do.”

Johnson said a deputy out serving civil process papers could swing by a senior’s home to check if they don’t answer the phone.

He also said he plans to explore introducing hybrid vehicles to the department to cut fuel costs.

“There’s no reason deputies that serve civil process can’t do it in a vehicle that gets better gas mileage,” he said. “You can’t say, ‘This is how we’ve always done it, so this is how we’ll keep doing it.’”

He also said he hopes to start summer youth outreach programs and an Explorer program, in which sheriff’s deputies would mentor teens who are interested in law enforcement.

He also wants to start an auxiliary deputy unit to save money.

He has called for the office to seek accreditation through the Virginia Law Enforcement Professional Standards Commission.

Johnson said accreditation would force the department to have a set of policies and standards. However, accreditation isn’t his top priority, he said.

Johnson has also said he would commit to looking for more grant opportunities and looking for other ways to cut costs.

“Times are tight for people,” he said, noting he has financed most of his campaign. “We’ve been able to do some amazing things with the resources that we have.”

He said if he gets the position of sheriff, he is committed to the job.

“I’m not looking to be sheriff for four years and then move on to something else,” he said. “This is something I want to do and commit myself to.”

Johnson’s current employer, the Newport News Sheriff’s Office, said it is conducting an internal affairs investigation of the fact Johnson appears to be wearing his uniform in his campaign pictures, which have appeared on his website and signs, among other places.

“Our policy prohibits personnel from wearing the department uniform for political purpose or gain,” Newport News Sheriff’s Office Public Information Officer Kathleen Carey wrote in an email. “The matter has been turned over to our Internal Affairs for further investigation.”

Johnson said the badge and nametag he is wearing in the photos do not belong to the department.

“There was a question about it,” he said. “As far as the department’s concerned, I think their investigation is pretty much over.”

All figures are through Sept. 30.