EDITOR’S NOTE: Three people — Raleigh Isaacs Sr., Aaron Johnson and Jen Pond — are running for election to the office of sheriff of the city of Suffolk on Nov. 5. This is the third in a three-part series of profiles of the candidates, which began Wednesday in the Suffolk News-Herald. The stories appeared in alphabetical order of the candidates’ last names. A story about Isaacs appeared in Wednesday’s edition, and one about Johnson appeared in Thursday’s edition.

Jennifer Pond says her integrity and determination to reach out to the community and modernize the sheriff’s department should win her votes in the upcoming election for the position.

Pond holds a bachelor’s degree from Elon University and is working on her master’s degree from Boston University. She previously worked for about seven years in the Suffolk Police Department and now works in the Portsmouth Sheriff’s Office.

“I feel I can do a better job in a lot of different areas,” Pond said of the Suffolk Sheriff’s Office. 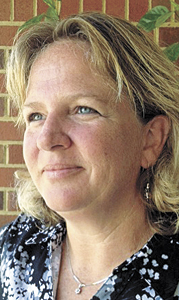 Before entering the law enforcement field, Pond, a New Jersey native, worked in a variety of other areas, including retail management and at a center that helped developmentally disabled individuals become more independent.

In 2004, she attended the police training academy and graduated No. 1 among Suffolk officers, she said.

She started off in the department’s street patrol but had to take a leave of absence to care for her aging parents. When other family members were able to help, she came back and was taken on as a recruiter.

“I knew I could sell the department,” she said, describing recruiting trips to neighboring states before the economy tanked. “It’s a different side of law enforcement.”

Last year, she left the department and joined the Portsmouth Sheriff’s Office, where she works in a number of different areas, from courthouse safety to operating the control room to transporting prisoners.

If elected, Pond says, she will begin the process of having the sheriff’s office accredited.

“This is an agency that, right now, is in need of some updating,” Pond said of the Suffolk Sheriff’s Office. “Most of our neighboring cities are already accredited.”

Among the benefits of accreditation would be standardized policies and procedures that are reviewed on a regular basis, both internally and externally, she said.

“If everyone is following the policies and procedures, it eliminates any anomalies,” she said.

As an example, she said, the sheriff’s office currently does not have a policy on use of force in its handbook.

“When do you go to your gun?” she asked. “You’re not going to find it in there. It’s very important your deputies know how to respond to these situations.”

Accreditation would lend credibility to the department and give citizens confidence that policies and procedures on safety are being followed, Pond said.

“It’s just a way of keeping up with standards,” she said.

Pond also took the current sheriff, Raleigh Isaacs Sr., to task on the fact his son, Raleigh Isaacs Jr., has been arrested for driving under the influence of alcohol multiple times. Every time the charge has been reduced, dismissed or not prosecuted.

Pond called that a “statistical anomaly” and said the perception of favoritism has damaged the sheriff’s office.

“You have to set the example,” she said, noting the idea that favorites can be played might trickle down into the ranks. “You’ve got to clear that up. I know that doesn’t feel right.”

Pond has said she would give $10,000 of her salary to either assist or create community programs. She mentioned one civic league whose meeting she attended where members hoped to get young people involved by giving them a skating rink party if they came to a meeting.

“I want to help something like that,” she said. “It’s not a lot of money, but who knows? Maybe it will get matched.”

Pond also addressed the circumstances under which she left the Suffolk Police Department in July 2012.

Before leaving the department, she had received the Officer of the Quarter award in 2012. She also showed the News-Herald her personnel file, stripped of physical and mental health evaluations, and the file contained a string of positive performance reviews.

She said some things happened while she was assigned to the narcotics unit that she was not comfortable with, and she brought them to the attention of department leaders.

Pond said a meeting with some of her supervisors took place in which her integrity was questioned. After that meeting, she finished her shift and drafted a letter of resignation to Chief Thomas Bennett that night.

“My veracity is something I take very seriously,” she said. “I would rather not have been employed than be a part of that.”

She said she did not quit in the middle of a shift, as critics have said, but acknowledged she left her department-issued vehicle at one of the police precincts with her weapons and ammunition locked in the trunk and other city property, such as her badge, locked in the glove box. She informed the chief of the car’s location in her resignation letter.

Looking back, she says, she would have done it the same way.

“I didn’t know who I could trust,” she said. “The ground was quickly crumbling beneath me.”

Comparing her Suffolk Police Department career to a book, she said, “Seven chapters were great. The last two pages weren’t so great for me.”

City spokeswoman Diana Klink said Bennett could not address Pond’s departure, because it is a personnel issue.

All figures are through Sept. 30.