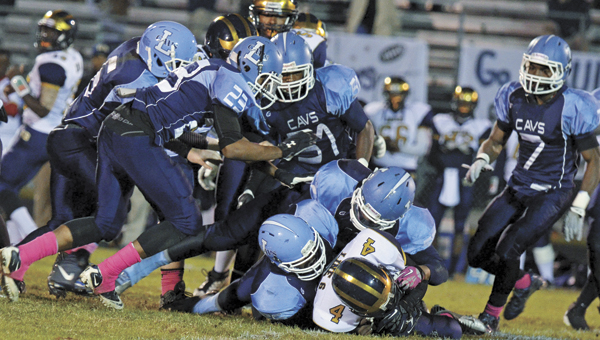 Lakeland High School’s defense collapses on the Western Branch High School runner, but the Bruins held sway on the ground for much of Friday night’s game. The Cavaliers lost at home, 52-14.

Lakeland High School’s home game on Friday evening against Western Branch High School got off on the wrong foot immediately. The Bruins ran back the opening kickoff for a touchdown en route to a 52-14 victory.

Lakeland head coach Bryan Potts said his team knew this game was going to be challenging because the Bruins “do a good job of executing what they do.”

And what they do is run. Most of the Bruins’ offense came off runs produced by their modified Delaware Wing T offense.

Lakeland’s offense had difficulty much of the night, even though Western Branch frequently helped it out with penalties of its own.

In the second quarter, a Western Branch facemask penalty helped push the Cavs offense from its own 5-yard line to the 22, but then junior quarterback Miles Goodman threw the first of his three interceptions.

“When you turn the ball over against the better teams in this district, they’re going to make you pay for it,” Potts said.

The cost came immediately as the Bruins defender returned it about 15 yards for a touchdown. Goodman’s interceptions on later drives led directly to touchdowns, giving Western Branch a 46-0 lead early in the third quarter.

Senior Markese Wright took over behind center, helping bring some life to the Lakeland offense. He scored twice on runs of 15 and 2 yards.

The latter touchdown was set up by his 55-yard pass to junior wideout Convon’Tra Revell.

Lakeland (1-7, 1-6) will travel to play Deep Creek High School next Friday evening to kick off the month of November.