Chuckatuck looks back — and ahead 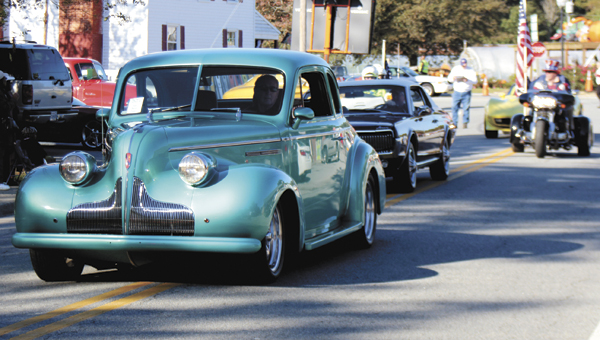 As part of Founder’s Day celebrations in Chuckatuck Saturday, a street parade proceeds down Kings Highway to the Chuckatuck Volunteer Fire Department building, where music by the Oakland Elementary School chorus and the Rhondels helped get the party started.

The second annual Founder’s Day in Chuckatuck Saturday enjoyed clear skies and healthy attendance, with folks enjoying as highlights a car show, a street parade and a performance by the Oakland Elementary School chorus.

Shortly after a 9 a.m. ribbon-cutting ceremony officially opened the restored Gwaltney store, folks began arriving in numbers to see an assortment of antique and collectable cars parked along Kings Highway near the Godwin Boulevard corner.

Among the enviable machines was Betty Sue Burris’s ’69 Chevelle SS, which she said had been in her single possession 45 years.

Scott Tunnell’s ’76 Cadillac Fleetwood Broughman had an original 25,000 miles on the odometer. “It was originally my great-grandfather’s car,” Tunnell said.

Folks lined Kings Highway for the parade to the Chuckatuck Volunteer Fire Department building. The event’s grand marshal, Chief Barry Bass of the Nansemond Indians, dressed in full regalia, and was driven by Jamie Bradshaw.

The biggest cheers were possibly reserved for Joe Barlow of Cotton Plains Farm, steering his John Deere down the road with his grandchildren along for the ride.

Lamonte White was one of many parents who turned out with other family members to hear their children perform three songs — “Community,” “Shenandoah” and “Look to the Future.”

“It’s wonderful,” White said, after seeing fifth-grader Donyae White perform with fellow chorus members. “I enjoyed it. He’s been with the chorus two years. It makes me feel good.”

Music teacher Rena Long, who led the chorus, said the children had practiced for a couple of weeks.

The songs she selected followed a particular theme. “It’s all about the future, and making sure we keep the generations communicating with each other and moving forward,” she said.

Invited up to say a few words, Chief Bass said he was honored to have been selected as grand marshal. “It’s great being here,” he said.

“With Mattanock Town coming to Chuckatuck, we are just going to grow and become a very special place,” she said. “We already are, but it’s going to get better and better.”

Kitty Martin, co-chair of the Greater Chuckatuck Historical Foundation event, said it was all about bringing people together.

“It’s bringing people together that you haven’t seen in a while, and making new friends,” she said.