Set from the start

Every successful athlete must be zealous to improve and learn more about her sport. Brooks Gillerlain has been that way about volleyball since fifth grade.

Now, as a junior setter for Nansemond-Suffolk Academy’s varsity team, her whole season was aptly illustrated by her performances during the third week of October. 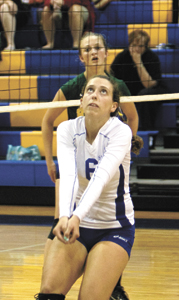 Nansemond-Suffolk Academy junior setter Brooks Gillerlain’s continued development has been a key part of the Lady Saints’ success this year.

As she has since August, she continuously stepped up her game during the week, helping add three more wins to the Lady Saints’ streak, which currently stands at 25. Gillerlain’s play earned her a nomination and eventual win as the Duke Automotive-Suffolk News-Herald Player of the Week.

“I think she’s done a really good job this year,” NSA head coach Robyn Ross said. Referring to first team all-state setter and recent graduate Quinby Hines, Ross said Gillerlain “has some big shoes to fill, which can be sort of intimidating, and the thing that I like most is that she has gotten better and better throughout the season.”

Playing Norfolk Academy on Oct. 15, she delivered 28 assists. She had 30 with two aces in the Oct. 17 match against Norfolk Collegiate School and handed out 42 assists the next day against Collegiate School.

The dominance Nansemond-Suffolk (30-2, 9-0) has displayed this year has been remarkable, but Gillerlain deflects praise for her role in the team’s success.

“I’m really nothing without my passers and my hitters,” she said.

Ross had a slightly different perspective: “She does have a great supporting cast, but they can’t be great unless they get the sets that they need.”

“She would teach you how to play,” Gillerlain said. “It wasn’t really a team. It was like a camp after school.”

Nuckles said, “From the time I had her, she was that little kid that wanted to do more, wanted to learn more, wanted to come to every single camp and practice that I had, even before she was old enough to be on the (junior junior varsity) team.”

“I was the one that told her mom, ‘You know, Brooks wants to play so much, you should really get her into travel volleyball,’” she said.

Initially, this involved trips to the Virginia Beach Volleyball Academy, but she later joined Ross at the Nansemond Volleyball Club.

Gillerlain played soccer and swam when she was younger, but she said volleyball was the only sport that stuck.

Both Nuckles and Ross acknowledged the difficulty coming behind someone as talented as Hines, but Ross said Gillerlain is “starting to see, like Quinby started to see, the rewards of your hard work.”

While she is not sure if interscholastic college volleyball is in her future, she said she is thinking she might want to pursue club ball “because it would probably be really weird not playing volleyball in college.”

For now, her motivation to play her best is largely tied to the Lady Saints.

“I think I always want to play well, no matter what I’m doing, but this year it’s just that drive to help my team get that (Tidewater Conference of Independent Schools) and state title,” she said.