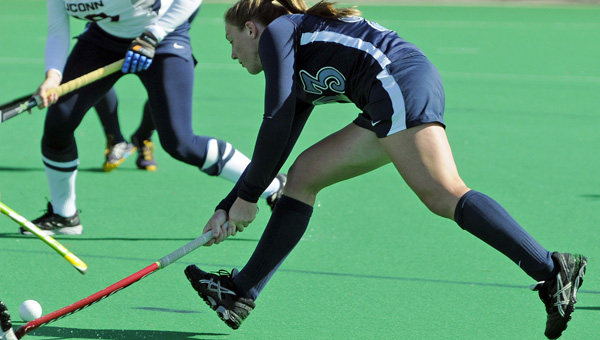 Former Lakeland High School standout Kelsey Smither competes against the University of Connecticut, a game in which she had three assists. Smither has been valuable to an Old Dominion University field hockey team that has turned its season around in the last month.

Heading into a Sept. 22 game against Michigan State University, the Old Dominion University field hockey team was experiencing a difficult losing season. The Lady Monarchs were 1-6, but they got a 3-1 victory on the day and have not lost since.

Former Lakeland High School standout Kelsey Smither has contributed eight of her 10 assists for the season during the current 10-game win streak, which includes victories over the No. 1, No. 2, No. 4, and No. 17 teams in the country.

“It really is a team effort to be able to beat these big teams because they have a lot of key players,” Smither said.

On Oct. 8, Old Dominion, with a 5-6 record, showed up at No. 20 on the 2013 Penn Monto/National Field Hockey Coaches Association Division I National Coaches Poll.

Smither said moving players to different positions on the field and overcoming an injury on the back line were the keys leading to the position Old Dominion now finds itself in.

“I knew from the beginning that we had the team and the players to be successful, it just took some figuring out,” Smither said.

She was heavily instrumental in Friday’s home game against Connecticut, displaying unselfish play throughout, resulting in assists on three of her team’s five goals.

Though the Lady Monarchs have more losses than any other team in the top 10, timing has been the important thing.

Smither said the team’s play has been a tremendous accomplishment because “we are successful at a good point in the season.”

ODU will travel to Piscataway, N.J. to play Rutgers University on Nov. 1.