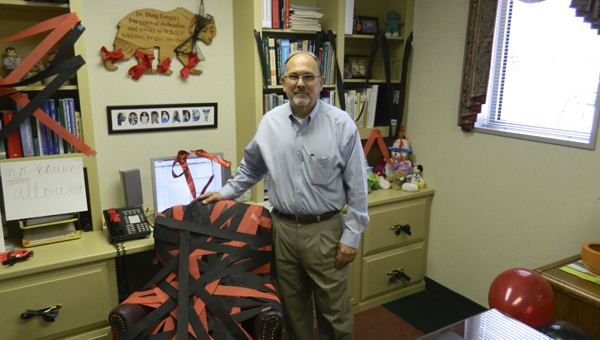 Dr. Doug Gregory, team physician for Western Branch High School, stands in his Lakeview Medical Center office, which features a Nansemond River High School-themed redecoration. It is the latest move by his granddaughter, Shelby, a senior at NR, in what has been a four-year rivalry between the two.

Just because two people are rivals, it does not mean they cannot remain friends — or even grandfather and granddaughter.

Shelby Gregory, a high school senior, stays with her grandparents during the week, and her grandfather, Dr. Doug Gregory, has served as the team physician for Western Branch High School for the last 29 years.

“When I was in sixth grade, I used to go over and help him at Western Branch,” Shelby Gregory said.

Her mother, Paige Swaim, was a student athletic trainer in high school, so she decided to follow in her footsteps as a freshman at Nansemond River High School.

“Because Western Branch and Nansemond River played each other, we’ve just had this little rivalry,” Shelby Gregory said. 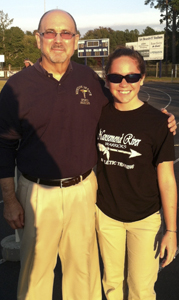 Dr. Doug Gregory and his granddaughter Shelby near the end of a four-year rivalry featuring pranks and plenty of trash-talking as a result of separate allegiances to Western Branch High School and Nansemond River High School, respectively.

Dr. Gregory said it was a natural development, and “it’s a lot of fun.” It spills over a bit into baseball season, but he said, “Football’s a little more intense.”

The rivalry has manifested itself in a variety of ways. When Dr. Gregory got back into town this past Tuesday, he found a surprise at Lakeview Medical Center, where he serves as pediatrician and medical director.

His office was decked out in Warriors colors, courtesy of his granddaughter. Included in the décor were red and black balloons lining the desk, bows tied around the handles of each drawer and streamers enveloping his chair, preventing him from sitting in it.

“It took me like two hours,” she said, adding it was worth it.

“She really got me this time,” Dr. Gregory said.

“Then he brought me flowers decorated in Western Branch colors to school on Tuesday,” Shelby Gregory said.

However, she revealed he had not yet discovered everything she had been up to since he was gone. Dr. Gregory has team apparel he wears when patrolling the sideline, and she said, “I took all of his Western Branch clothes out of his closet, and I hid them from him.”

Dr. Gregory recalled an epic back-and-forth from a previous year. He entered his walk-in closet to discover his granddaughter had lined it with her own Nansemond River apparel, including shirts taped over the shelves.

He countered by placing the words “Shelby loves the Bruins” on her car’s spare tire cover for all to see, something she never discovered.

“I guess it blew off before I got to see it, but he told me that he put it up there,” she said.

The rivalry reached a fever pitch in 2011, when an 82-yard touchdown pass from Darwin Barbee to Shannon Evans gave the Warriors a 37-30 win.

“We won, and I never let it go,” Shelby Gregory said, which her grandfather confirmed: “I had to listen to her for a whole year yapping about Nansemond River beating Western Branch.”

Dr. Gregory said there is a lot of trash-talking that goes on between the two, but admits, “I root for Nansemond River when they’re not playing Western Branch.”

He actually treats many of the players on either side through his practice.

As Shelby Gregory prepares to graduate next year, she reflected on her annual arrangement with Grandpa.

“We get a lot of pleasure out of this,” Dr. Gregory said. “It kind of makes that grandfather/granddaughter bond a little tighter,” particularly because she is pursuing a similar field.

She will continue learning to be an athletic trainer in college, though she is currently unsure where that will be, deciding between East Carolina University and Bridgewater College.

What is certain, however, is that when the Warriors and Bruins clash once again on Saturday night, the Gregorys will be on opposite sidelines, letting their loyalties be known.