Pursuit to play at home 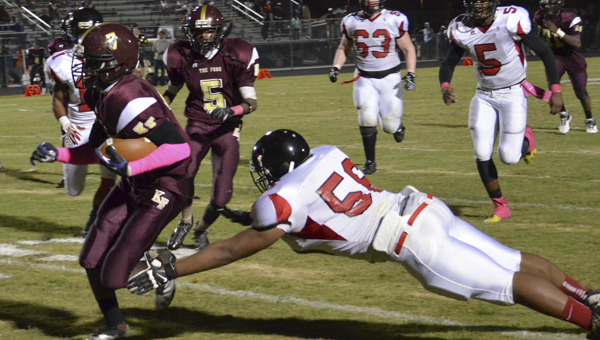 King’s Fork High School junior TyQuan Weston and the rest of the Bulldogs look to improve their chances of hosting a playoff game by winning their final regular season home contest tonight against Hickory High School.

King’s Fork head coach Joe Jones said the Bulldogs have “a lot of opportunities ahead of us starting this week.”

With a victory tonight, King’s Fork can go undefeated at home for the first time and set itself up for a first-ever eight-win season and potential home playoff game. The Bulldogs rank ninth in Region 4A South; the top 16 qualify for the playoffs.

Jones said the Hawks (2-6, 2-5) are big up front, benefiting their running game, which features sophomore fullback Cameron Conrad. The Bulldogs have focused on tackling fundamentals this week to prepare.

When on offense, the Bulldogs need “to be able to recognize when they switch defensive fronts,” Jones said. King’s Fork has also been working a lot to develop an effective passing game.

The Saints (7-2, 2-2) have successfully secured a playoff berth and will finish somewhere in the top three among Division II schools in the Virginia Independent Schools Athletic Association. A win tonight against the Navigators (5-4, 1-3) and a loss by The Potomac School could give NSA a home game in the opening round of the playoffs.

“Pressure’s off and we’re in, and the kids have been enthusiastic, and I think we’re ready to go,” Saints head coach Lew Johnston said.

On Thursday, Johnston said an outside shot at a home game next week “means that we have to play well and win tomorrow night.”

It will also be a special senior night, with 14 seniors on the team.

Navigators senior running back Quincy Mock has filled in behind center after HRA’s quarterback broke his hand recently. As always, the Saints will look to shut down the run.

Junior Camden Sutton returns to the lineup, recovered from a high ankle sprain.

Both teams hold records of 1-7 overall, 1-6 in the district. Lakeland head coach Bryan Potts said he and Hornets coach Calvin Copeland share similar mindsets about tonight: “I know we both think it’s a winnable game.”

Potts said the Hornets like to spread things out offensively, which plays into the strength of Lakeland’s defense. He said Deep Creek has a good, young quarterback, but the Cavs will try make him move around a bit.

Potts said Lakeland junior quarterback Miles Goodman “needs to have a breakout game,” and he later added, “I think he will.”

The Cavaliers have no key injuries entering tonight’s contest.

Due to the high chance of rain tonight interfering with Western Branch’s homecoming, this game has been rescheduled for Saturday at 7 p.m.

“We know we have to take care of now,” he said. “Now prepares us for later on.”

Rather than focus on an individual, Parker said, “The key is just to stop the running attack, period, because I think that all of those guys can hurt you.”

Aside from Nansemond River, all the games will begin on Friday at 7 p.m.