A $2,000 grant from Keep America Beautiful is helping the city take action to reduce the number of cigarette butts and cigar tips littering the city. 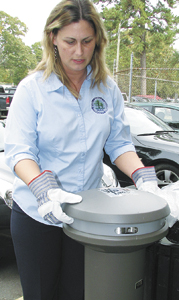 Crystal Boyd, Suffolk’s litter control coordinator, prepares to empty a cigarette receptacle behind the Human Resources Building on Thursday. The city is targeting tobacco litter in a new campaign.

Tobacco products are the most-littered item in America, according to a 2009 study by Keep America Beautiful. They represent nearly 38 percent of all litter, and the same research showed people who would never litter items such as drink cans or paper packaging don’t think twice about tossing a cigarette butt.

“A lot of people don’t even think it’s litter,” Suffolk Litter Control Coordinator Crystal Boyd said. “They think, ‘I can just flick it, and it will go away,’ but it doesn’t.”

Boyd said there is plastic in cigarette filters and cigar tips that does not biodegrade easily. They also wind up in the water easily, she said.

“The rainwater will carry them away, because they float, and then the animals mistake it for food, and it causes them to die,” Boyd said. “It’s not just our community; it’s across the globe.”

Part of the grant has been used to purchase eight cigarette receptacles. They have been placed at the Human Resources Building, Municipal Building, Visitor Center, Godwin Courts Building and the pedestrian traffic signal at the corner of Washington and Main streets.

Cigarette litter — and litter in general — is more of a problem at transition areas like crosswalks, traffic lights and building entrances, Boyd said. Even so, litter surveys conducted in the city show the amount of litter is decreasing, she said.

The city also will distribute pocket and portable auto ashtrays to adult smokers and encourage enforcement of litter laws, according to a press release.