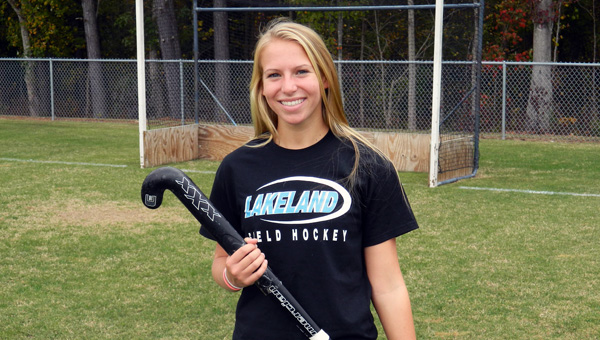 Leader: Lakeland High School senior midfielder Kristen Vick has been coming through for her team since her freshman year. Her winning goal in sudden death overtime against First Colonial High School led to her win as the Duke Automotive-Suffolk News-Herald Player of the Week. (Titus Mohler/Suffolk News-Herald)

Editor’s note: This week’s Duke Automotive-Suffolk News-Herald Player of the Week was chosen by the newspaper staff, as the two top vote-getters in our online poll received hundreds of votes from invalid email addresses apiece, making it impossible to determine which nominee had the most actual votes. Remember, voters: There’s one vote allowed per valid email address.

The Lady Patriots had not lost in two years, but in 7-on-7, sudden-death overtime, they went down a player after a penalty, and Lady Cavaliers head coach Tara Worley wanted the ball on the stick of senior midfielder Kristen Vick.

“Kristen can be and is a major playmaker for us,” Worley said. “When she lets loose and takes off down the field, there are few that can stay with her, and so when numbers were on our side, that’s what I was hoping she would do.”

Shortly thereafter, Vick scored the goal heard ‘round the state and beyond. For it, she was named the Duke Automotive-Suffolk News-Herald Player of the Week.

Vick gave coach Worley some of the credit: “I was glad that I could step up to what she wanted, but she’s been pushing me a lot since ninth grade.” Then, she added with a laugh, “Sometimes I need that extra push to get going.”

One of the most impressive things about Vick is how long she has been an important part of Lakeland field hockey and how early the run started. As a freshman, she played every minute of every game during the 2010 Group AAA state championship season.

Worley said she knew then big things were ahead for Vick. She told her young player, “‘You can be the leader of this team,’ and that’s what she’s become.”

Most recently, she has helped the Lady Cavaliers go 18-0 this season and was named Southeastern District Player of the Year in 2012.

Worley said Vick brings some natural abilities, but added, “She’s put a lot of time, effort and energy into becoming who she is as a player.”

Vick said, “I first started playing field hockey when I was 7 or 8.” It was in Coach Worley’s summer league.

Before Vick was old enough to play for Lakeland, Worley recalled her being the team���s scorekeeper.

“When you’re the scorekeeper, you’re with the team all the time, so you get to see firsthand what it’s all about,” Worley said. This exposed Vick to the work ethic of strong players.

Vick also runs indoor and outdoor track and plays soccer. Field hockey is the clear favorite, though, “I guess mostly just because I’ve been playing for so long,” she said.

She plans to continue in college, having verbally committed to Old Dominion University. There she will get to play alongside former Lakeland teammate Kelsey Smither. Smither has represented the United States on different teams at the under-21 level, and Vick would like to follow in her footsteps. “I’m definitely going to try,” she said.

As for what fuels her drive to give her all on the field, Vick has more than one source.

“I want to push myself,” she said, but then alluded to her coach, parents and “a little bit of everybody” when she said, “I just want to be as good as I can, I guess, to meet their standards.”