Redemption man has a story for teens 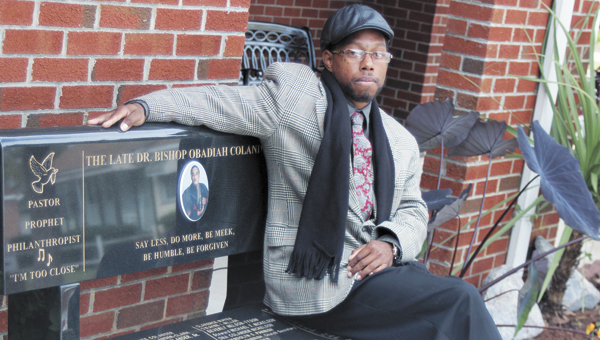 Antwan Robinson Sr. sits on a bench at his church honoring its late founder, Faith Temple Ministries’ Dr. Obadiah Colander. Robinson, who came to the church after struggling with drugs and serving prison time, said the bishop inspires his ministry work with at-risk youth.

A man who overcame “struggles on the streets” says a Nov. 12 church event he’s organizing will be the first of many aimed at stopping at-risk Suffolk teens from heading down the wrong road.

Antwan Robinson Sr., 36, is a father of five boys and one daughter, as well as to four stepsons. He says he turned his life around after struggling with drugs and spending time in prison.

“I have witnessed things that were not pretty,” he said.

“Pastor Troy introduced himself to me one day and we talked,” Robinson said.

Robinson says he’s now a regular churchgoer who wants to use his experiences on the streets and behind bars to help ward young people from that very path.

The first event he’s organizing will take place at the church, 476 Wellons Street, from 6 to 8 p.m.

Suffolk Police Department’s anti-gang division will be represented, Robinson said, and juvenile probation and parole officers will also attend. Refreshments will be served.

Robinson said he also wants to help those whose lives are already awry. “I look around every day and I see youth that’s going down the wrong path,” he said.

Ruffin said his church is concerned about the welfare of everyone in the community, especially the children.

“This is what we believe Jesus wanted us to do,” he said, “to reach out to the community.”

“Society had grabbed a hold” of Robinson, the pastor said, but now he has “made a choice.”

“He wanted to get right and got his life together,” Ruffin said. “Now he wants to share that vision and get others and try to pull them out.”

Robinson said he feels inspired by the founder of Faith Temple Ministries, Bishop Dr. Obadiah Colander, who is honored at the church with a marble bench in his name and bearing his smiling visage.

“I wish I could have met him, because they say he was full of wisdom,” Robinson said.

“I feel that his ways are living through me.”

A movie night, lock-in, and job-hunting expedition are among other events Robinson says he’s planning for teens.

“No matter what, I’m not going to give up what I’m doing,” he said. “I’m going to continue to try to help our youth.”