The Nansemond River High School field hockey team set out at the beginning of the season to qualify for regionals, something it had not done in more than 10 years. 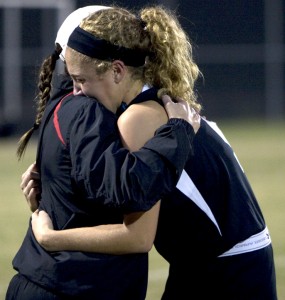 Its season came to an end Tuesday evening in a 6-1 loss to host Tabb High School. But the fact it was a regional semifinal was a reminder the Lady Warriors not only achieved their season-long goal, but also went further.

Nansemond River had advanced past the first round of regional competition on Monday with a 6-0 win over Churchland High School at Powhatan Field in Norfolk.

“I really am proud of how far we’ve come,” senior back and team captain Madison Janek said amidst tears on Tuesday after having played her last high school field hockey game.

This year’s Lady Warriors seniors were freshmen when head coach Ali Mowry began her time with the team. She looked back on their final year as it had just concluded.

“Fantastic season,” she said, with tears of her own. “Fun group of girls to coach. I think we’ve steadily improved since they were freshmen.”

The numbers agree as the team finished fourth for the regular season in the district in 2010, third in 2011, second in 2012, without qualifying for regionals, and second in the conference in 2013, with regional qualification.

As far as the contest against Tabb, Mowry simply acknowledged the formidable challenge the Lady Tigers posed.

“They were just a tough team, tough team to get by,” she said. “I don’t think my girls gave up.”

Penalty corner and shot-on-goal statistics made it obvious where the ball was for much of the game. The Lady Tigers dominated possession, garnering 25 penalty corners and 37 shots on goal. Nansemond River had two apiece.

Tabb held a 3-0 lead at halftime and doubled it about halfway through the second half. Still, Lady Warriors senior Brooke Street helped limit the Lady Tigers, earning the vast majority of the team’s 29 goalkeeper saves.

After both teams began to pull their starters, Nansemond River made headway into the Lady Tigers side of the field and sophomore midfielder/back KateLynn Hodgkiss ensured the Lady Warriors would not leave without a goal. She scored off a penalty corner from senior forward Kimberly Bates.

Though her time with the Lady Warriors (12-7) had reached its end, Janek expressed confidence in the ability of her young teammates to continue the run of success. “I have no doubt that they’re going to keep it going,” she said.