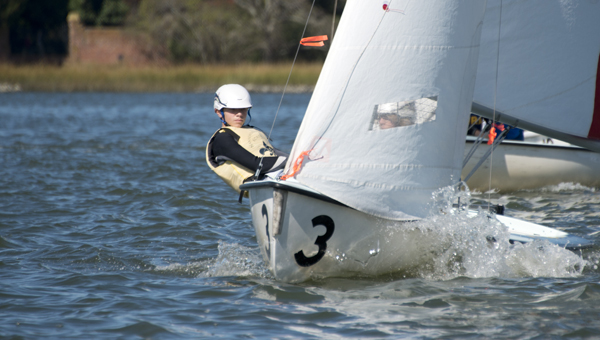 Lack of wind prevented the recent Tidewater Conference of Independent Schools Championships from yielding usable results. However, this conclusion could not put a damper on the second year of competitive varsity sailing at Nansemond-Suffolk Academy.

“I have nothing but positive feelings about how this season went,” NSA head coach Pat Hillard said. “It was just a really developmental season for the sailors.”

The fact that Nansemond-Suffolk has a sailing team has been a pleasing development for all involved since the program got off the ground in 2010.

NSA communications coordinator Ashley Greene said, “I think it’s just so cool we have it, because I graduated from here, and we did not have sailing.”

The program came about primarily because of three different individuals. Husband and wife, Pat and Kollette Hillard, have been sailing for most of their adult lives. They were passionate enough about it to actually live on a sailboat for a while.

“We were on the sailboat most of the year, beginning spring of 2008 through June of 2009,” Pat Hillard said.

The third person involved was a student, Christine Comer, who loved to sail and had already been trying to figure out how she could start a sailing club at NSA. However, she needed faculty sponsorship, and both the Hillards teach at the school.

Pat Hillard said, “We had the sailing knowledge and the desire to see something get started here, as well.”

After two years of club competition to ensure the new sport would be sustainable and generate enough interest, the team began formal varsity competition against other schools in 2012.

Interest has persisted, particularly among a young group of students at Nansemond-Suffolk.

The 2013 squad of 10 sailors has only one upperclassman; it features a freshman and eighth-grader for a team captain and first mate.

“This group has been the most dedicated group in terms of being at every practice, every workout, and every meeting,” Pat Hillard said.

She is the only one in her family who sails.

“I’ve sort of always loved the water as a child and when I came to the school actually in sixth grade, I heard there was a sailing team, and I really decided I wanted to try something different,” she said.

She was named team captain by her fellow sailors.

“They view her as the most consistent sailor on the team and have a lot of respect for her leadership,” Pat Hillard said. “She’s a good teacher.”

“I actually like being team captain,” Kaila said, “It’s fun.”

Ian Lotz is also well respected by his peers and was named first mate. This was his second year with the sport. He was first introduced to sailing on his father’s larger vessel, then Ian and some friends decided to try out smaller boats for NSA. “We want to do it for fun,” he said.

Junior Eason Barclay is the oldest member of the team, which also includes freshman Hailey Gilman, eighth-graders T.J. Argust, Mitchell Hynes and Harrison Parker. Three other members got their start this past summer through the NSA sailing camp: eighth-grader Nicole Lavallee and seventh-graders Mihir Damle and Alex Wilkerson.

Pat Hillard explained the two-tier challenge posed by the sport to each of the young sailors.

The first is boat management, which involves learning the different parts of the boat, what they do and how to manipulate them. This enables the skipper and crew to work their way upwind and downwind as quickly as possible.

The second tier is course management, which includes employing appropriate tactics for the wind, the location of a race’s turning points and opposing boats involved in a competition.

“I think I’ve improved a lot this season with tactics,” Kaila said.

Hillard said his sailors improved but struggled to be consistent this season. He was not discouraged. “Learning how to compete in a tactical situation with 24 boats on the same course requires a tremendous amount of experience,” he said.

He praised his team for continuing to absorb the knowledge it needs to succeed.

“That makes it a joy to coach, really,” he said.

NSA’s sailors are young, but “if they continue on this track, I see nothing but good results that lay ahead,” Hillard said.