A beloved dentist and real estate developer died Tuesday after a long period of declining health. 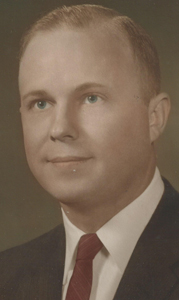 “He was a good man, a really kind-hearted, generous man,” daughter Ann Hill said Thursday. “Dad has been in declining health for a while now, but he would still wake up with a smile on his face. No matter what was going on, he would always ask, ‘How are you doing?’ He was more worried about everybody else.”

Hill said her father was born in Norfolk, and the family moved to a farm in Driver when he was a youngster.

“He was one of five kids, raised in the Depression, but they all still went to the dentist,” she said. “He noticed that the dentist, no matter what was going on, always got paid — even if it was in chickens.”

After graduating from Chuckatuck High School, the College of William and Mary and the Medical College of Virginia, March served as an officer in the U.S. Navy during World War II. He established his dental practice in Suffolk in 1948 and retired in 1974.

Her father never mentioned getting paid in chickens at his own dental practice, Hill said, but he always remembered his patients.

One investment March was particularly proud of was an 1809 house in Smithfield that he restored and was later listed in Colonial Homes magazine, Hill said.

“That’s something that meant a lot to him, to bring that back to life,” she said.

March also was involved in community service as a member of the Kiwanis Club. He was instrumental in the founding of Nansemond-Suffolk Academy, served on its board and planted the trees in front of the school, Hill said.

Visitation will be held tonight from 7 to 8:30 p.m. at R.W. Baker and Co. Funeral Home and Crematory, 509 W. Washington St. A graveside service will be held Saturday at 2 p.m. at Cedar Hill Cemetery.