The mother of a 26-year-old Suffolk man who was murdered 15 years ago plans a candlelight vigil in his honor Monday at White Marsh Plaza Shopping Center.

Anita Costley said she still hears from friends of her son, Melik Powell, who was shot while using a pay phone at the shopping center in November 1998. 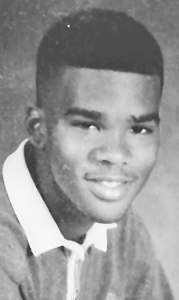 “He was such a nice guy,” she said. “He was well known as a very nice person. Everybody just loved him. People are still talking about him — it’s like nobody’s really forgetting.”

Powell’s murder was the first one cleared by the city’s then-new cold case unit, which arrested and charged Dedric Sherrod in 2008. Sherrod was convicted in November 2009 by a jury, which recommended he spend 30 years in prison for the crime. A Circuit Court judge approved the sentence.

The time includes a sentence of 16 years for second-degree murder, eight years for two counts of using a firearm in the commission of a felony, four years for attempted robbery, and one year each for conspiracy and shoot, stab, cut or wound.

Prior to the cold case being solved, Powell’s mother had been trying to find out for herself what had happened that night, asking questions of “anybody and everybody,” she said.

She finally got a call from Sherrod, who was in prison and told her in detail what had taken place, she said recently. “He came to me and said, ‘We did it.’”

She called police with that information, and they picked Sherrod up in Georgia.

“Because I never gave up — I kept going, because I wanted justice — I really felt good about (the cold case being solved),” Costley said.

“But then, when it was actually solved, I felt lost, because I didn’t have anything to do. I kept going, and once (detectives) stepped in, it was time for me to stop. I didn’t know what to do.”

Powell’s daughter, Chantionna Willis, a King’s Fork High School junior who was 2 at the time of her father’s death, will speak at the event, according to Costley. There will be special music, and Domenick Epps will also speak.

“It’s been laying on my heart, realizing that it’s been 15 years, and it doesn’t go away,” Costley said. “I’m a spiritual person, and the Lord is just carrying me to help ease the pain, to help me move on.”