Cavaliers fall in final game of 2013 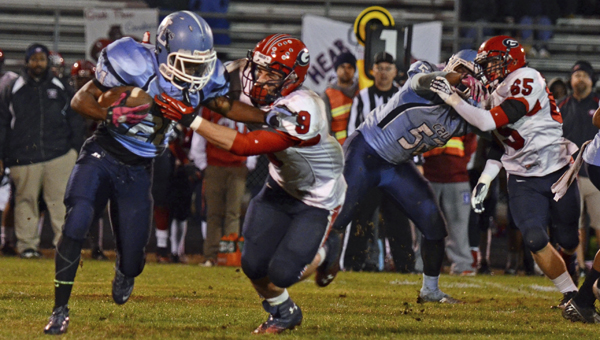 Lakeland High School was at the top of the Suffolk football world in recent years, and the Cavaliers seemed to capture some of that magic in the first half on Friday night.

They briefly took the lead over Grassfield High School, but the visitors from Chesapeake recovered in the second half. Lakeland allowed two unanswered touchdowns to end the season with a 29-12 loss.

In the first quarter, a bad snap led to a safety, putting the Cavs in an early 2-0 hole. The Grizzlies sandwiched that score with two dead-end drives courtesy of Lakeland’s effective defense.

On their third drive of the game, however, Grassfield converted off a run by senior running back/defensive back Isaiah Harper. 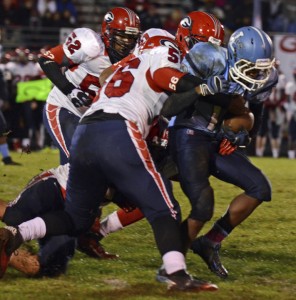 Lakeland High School junior running back Ja’Juan Walker braces himself as defenders from visiting, Group 6A South playoff-bound Grassfield High School collapse on him Friday night. The Cavs finished 1-9 this year with a 29-12 loss to the Grizzlies. (Melissa Glover photo)

But then the Cavaliers’ game plan started coming together.

“I was very pleased the way we came out and moved the ball offensively,” Lakeland head coach Bryan Potts said.

To avoid giving opportunities to Grassfield’s star senior defensive back tandem of Harper and Vincent Lowe, Potts had planned to run the ball heavily.

Potts made the switch behind center from junior Miles Goodman to Wright because, he said, “I figured that he gave us the best chance to win.”

What he said he has noticed in Wright the last two weeks was true again on Friday.

“He was great with his decision-making,” Potts said. “I think he did a wonderful job of managing the ball game.”

Wright did have two interceptions Friday night but also led the team in rushing, averaging about six yards a carry for approximately 90 yards and a score.

Next, Lakeland went up 12-9 when sophomore fullback Jaquan Yulee scored on a two-yard run.

“We figured we could run the ball on them pretty effectively, and that’s what we did in the first half,” Potts said.

The second half did not yield the same results, though. Lakeland fumbled a snap in the end zone late in the third quarter, which Grassfield recovered to make it 23-12.

Another Grizzlies touchdown midway through the fourth quarter sealed the game.

At the conclusion of his first season as a head coach, Potts said he is not discouraged by the 1-9 final record, though he feels Lakeland is better than a one-win team.

He looks forward to having a full off-season this time around to help develop Lakeland’s players.

“I think the future for Lakeland football is bright,” he said.