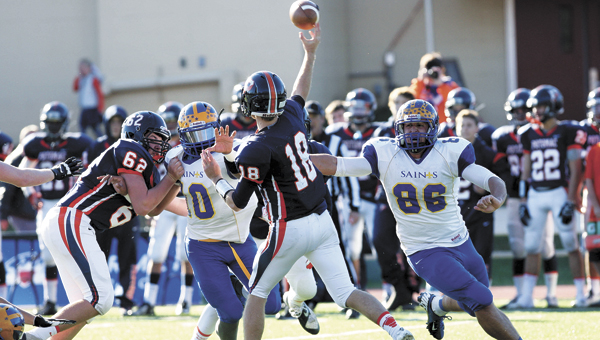 A season of promise for Nansemond-Suffolk Academy’s football team came to an end Saturday afternoon in the state semifinals with a 28-16 loss to host The Potomac School.

After the game, Saints head coach Lew Johnston spoke to his players and alluded to why the contest turned out the way it did.

The Saints brought the emotion in the second half, but the first half had already brought a 21-8 deficit.

Panthers senior quarterback Kevin Havermann had plenty of time to find receivers. Potomac scored first at the end of the first quarter off a Havermann 13-yard pass.

Nansemond-Suffolk took the lead briefly in the second quarter when senior split end Michael Tyler Lepore scored on a 5-yard run and junior fullback David Gough, who was limited by a back injury, ran in the 2-point conversion.

The Saints drove down and had several shots at the end zone just before halftime but could not convert.

At halftime, Johnston asked his team, “Where’s the enthusiasm? Where’s the intensity?”

In the second half, NSA finally got some pressure on Havermann. “We started blitzing a little more, and we got in his face a few times,” Johnston said.

The Saints took advantage of good field position on a botched punt with a 14-yard Gough touchdown run, followed by a Lepore run for the 2-point conversion.

But the Panthers were able to respond on the very next drive and scored their only points of the second half.

“That was kind of the back-breaker,” Johnston said. A defensive stop was needed to help keep the momentum.

He gave credit to Potomac for being a good football team. “They got in the right defense and made plays,” he said.

The Panthers’ offense was perfectly balanced with 172 yards apiece passing and rushing. Broome ended up with 91 yards rushing, but the Saints, known for taking away the run, did manage to hold him far below his season average of 206.7 yards per game.

Ultimately, NSA could not generate enough offense to recover in the second half.

Senior quarterback Jackson DeMello was forced to throw far more than usual, with 10 completions on 25 attempts for 113 yards and two interceptions.

Gough ended up with a tally far below his own standards, running for 62 yards on 17 carries. Lepore led the Saints with five receptions for 64 yards.

Despite the loss, Johnston said it was an excellent season. The Saints went 8-3 in a year in which they say goodbye to 14 seniors.