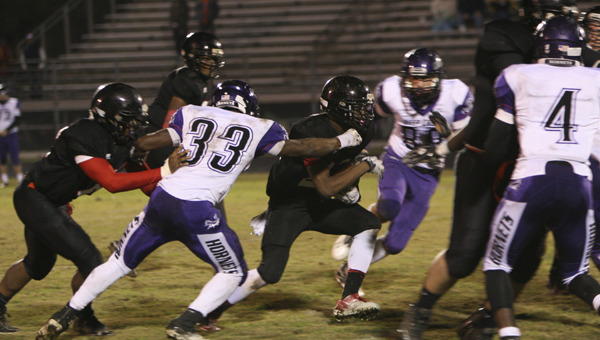 For the last two years, Nansemond River High School’s football team has been on the brink of the playoffs and been denied.

This year, the Warriors ensured, would not be the same. They allowed Deep Creek High School to get into the game late, but strong defensive play secured a 34-20 home win Friday and a playoff berth along with it.

Nansemond River head coach Tracey Parker told his players now that they have the monkey off their backs, “Now let’s take advantage of the situation.”

To do that, the Warriors will need to shore up some of the weaknesses on display Friday night against the Hornets. They won, but Parker said, “I feel like we made it harder than it needed to be.” 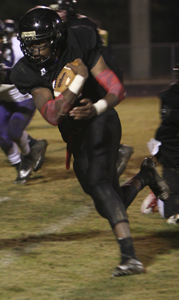 Nansemond River High School junior quarterback Jermaal Wells runs for more yardage on Deep Creek High School’s defense Friday night. He ran for two scores, threw for one and caught an interception in the 34-20 home win that clinched a playoff berth for the Warriors.

Nansemond River got itself into jams but often found a way to get itself out. After having to punt early in the first quarter, senior defensive back George Smith intercepted Hornets junior quarterback Terrence Shambry and scored a 50-yard touchdown.

Warriors junior quarterback Jermaal Wells reflected his team’s back-and-forth nature on the night at times, but it could not overshadow his overall fantastic performance.

He threw an interception late in the first quarter, but Nansemond River’s defense stopped Deep Creek. On the ensuing possession, Wells ran for a 36-yard touchdown.

After a big kickoff return set up a Hornets touchdown, a Warriors drive ended on a fumble, giving the visitors a chance to tie. But then, Wells came up with an interception near the end zone and returned it about 35 yards. He capped off that drive with a 17-yard scoring run.

Late in the third quarter, he found senior wide receiver/defensive back Tyshaun Anthony for a 28-yard touchdown to make it 28-7.

The game seemed to be in hand, but Nansemond River continued to turn the ball over and give Deep Creek opportunities, which it began to take advantage of. The Hornets closed the game to 28-20 with just over two minutes remaining, and they got the ball back.

Parker said he was surprised at this turnaround, but added, “The kids fought back when we needed to fight back.”

Anthony grabbed the Warriors’ third interception of the game and took it about 50 yards for the game’s final score.

Parker said it was probably the best game the secondary had turned in all year.

As of Friday night, Nansemond River was still waiting to learn the details of its upcoming playoff game.