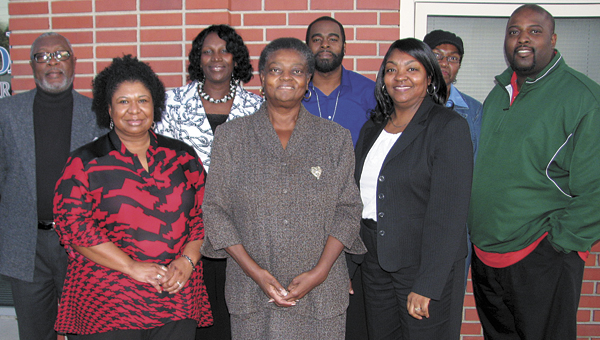 The cast and playwright of “Ghetto Tramp” pause for a photo. In the front row from left are Clintonia Walton-Saylor, Jo Ann Jones and Elke Boone. In the back row from left are Phillip Jennings, Brenda Newby, Gloston Wooten, Renee Shivers and James Rich.

The third installment of a series of stage plays will take place on Dec. 7 at 7 p.m.

The provocatively named “Ghetto Tramp,” written by Suffolk woman Jo Anne Jones, will stage its Part 3 for that night only.

The series has followed Janie, a woman who at first carried the burden of a “secret sin” in her life. She has since stopped the sin but “still carries that around as baggage,” Jones said.

“I consider it a ministry through dialogue,” said Jones, who doesn’t like to reveal too much about her plays beforehand. “It just happens to be staged dialogue.”

She believes the play will speak to everyone who sees it because “everything that happens in the play has happened to someone,” she said.

“We are sinners, but we do have a consequence for our sin,” she said. “God forgives us, but there’s a consequence.”

Cast members agree the play will speak to everyone in a different way.

“There’s something within the play to help each person,” Renee Shivers said. “Some people think God can never forgive them for what they’ve done, but they’re basing that on what people say.”
James Rich said the play “touches on a lot of different areas.”

Elke Boone, who plays Janie, said she said she hopes the audience gets a lot out of it.

“Of course I want them to get the entertainment piece but also the lesson,” she said.