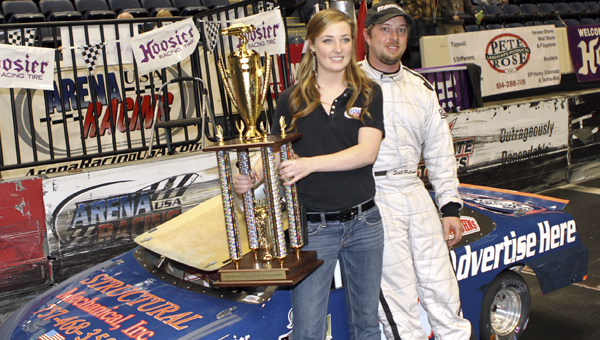 Pro Series kingpin Scott Prillaman, of Suffolk, began his title defense with a win in the 50-lap Top Dog race, the featured event of Saturday evening’s season opener for Arena Racing USA at the Richmond Coliseum.

Tyler Hughes was the pole starter but gave way to Jason Manes as the race got under way. Travis Wall briefly snagged the second spot, only to see Hughes regain the position on Lap 2.

The first caution flag flew on Lap 4, when Manes and Hughes tangled at the start/finish line. Both drivers were directed to the rear of the field, as the lead passed to Wall, a former series champ.

“A Main” winner Cody Carlton was deployed in second for the restart, followed by “B-Main” winner Scott Allen and Prillaman, who had moved from 12th to fourth. On the ensuing restart, trouble quickly broke out at the head of the field, and the result was a multi-car pileup off Turn 2.

Carlton, John Alford and Tripp Thurston were sidelined, while Wall was sent to the back of the pack.

As the field bunched for another double-file restart, Allen chose to launch from the outside lane, ceding the inside to Prillaman. Back under green, Prillaman took full advantage of the inside groove, flashing ahead of Allen, who suddenly had his hands full with Dystany Spurlock, who swiped second.

The yellow flag epidemic continued on through the end of the race, with cautions on laps 11, 17, 36 and two on lap 45. Through it all, Prillaman held a firm grip on the top spot.

Meanwhile, in his mirror, Jason Styron emerged as a potential challenger, hanging onto the runner-up spot for the bulk of the race. Nearing the end, Casey Sipe, making his first Arena Racing start, bypassed Styron and leaped into contention. He had two chances to overtake Prillaman on late-race restarts but couldn’t best the longtime veteran.

At the finish, Prillaman was the winner by 1.184 seconds — about half a straightaway — over Sipe. Styron was third, while Hughes and Dylan Loving completed the top five. Spurlock was sixth, followed by Manes and John Testerman, the final drivers to finish the entire distance.

John Nickens and Allen rounded out the top 10.