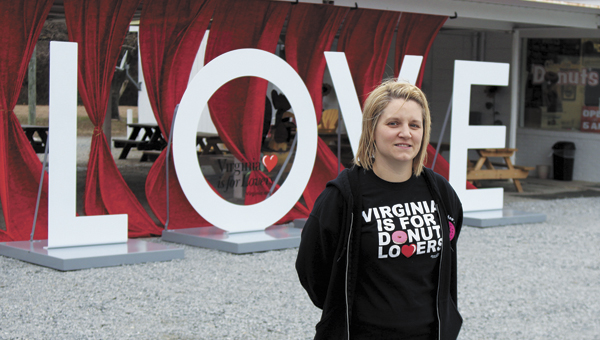 O’doodleDoo’s owner Reeva Luecke is excited to host the Virginia Tourism Corporation’s “LOVE” sign at her Bridge Road shop through the Valentine’s Day weekend. She said she thought it would be a fun thing to do for the community.

It’s that time of the year when love is especially celebrated among couples, families and friends — and this year, it’s the time they can get their picture taken with a giant “LOVE” sign.

The little word that means so much will be displayed in a big way on Bridge Road this weekend. The Virginia Tourism Corporation’s giant sign will be at O’doodleDoo’s Donuts through Sunday, and people who take their picture with it and upload it to Suffolk’s “Love Local, Buy Suffolk” Facebook page have a chance to win a bag of goodies.

“I was on the Internet one night and saw Virginia had this LOVE campaign,” said O’doodleDoo’s owner Reeva Luecke. “It said you could request it to come to your city and just fill out an application.”

She applied, not thinking it would be possible to get the sign on Valentine’s Day weekend. But she was excited to learn the sign would be coming — even though it meant she had to fork over a $500 transportation fee.

“I just think it’s hilarious that it’s Valentine’s Day and we get to bring it to our city,” she said. “I want to bring fun things to my city, and I want the doughnut shop to be part of those fun things, but it’s for everyone.”

The “LOVEworks” campaign of the state’s tourism corporation has more than 30 permanent displays throughout the state, as well as several pieces that travel across the commonwealth. It ties in with the state’s “Virginia is for Lovers” slogan.

The photo with the most likes on the “Love Local, Buy Suffolk” Facebook page will win a bag of goodies from O’doodleDoo’s and the city of Suffolk. The winner will be announced on that page on Monday.

“Hopefully it will bring people out to Suffolk,” Luecke said. “It’s just something fun to get people to visit Suffolk and check out businesses along the way and do fun things. I thought it would be so fun for the community.”

Facelift for the Folly

City officials join Riddick’s Folly board members and staff in cutting the ribbon on the museum’s new entrance. From left... read more