Now you see me…

When guests arrive at Cherry Grove Plantation on Chuckatuck Creek, the gracious lady greeting them has a magical history they wouldn’t suspect.

Janet Goldbach, who lives on the guest ranch with husband Richard, was a 7-year-old New Yorker when her father decided she should audition as a magician. 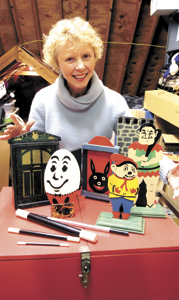 Janet Goldbach stands in her attic with some of the tools of a trade that consumed much of her time for 42 years. The storage space is crammed full of memories, including old costumes, top hats, puppets and other accoutrements of her time as a magician.

DuMont, a pioneering commercial television network, was offering the role. A tulip bulb company wanted to sponsor a show, and “a child who was 8 years old who could do magic” was required, Goldbach said.

“My father was fairly young, and he was in the society as well,” Goldbach said. “After the meetings, Harry would bring my dad aside to help him with his magic.”

The world-famous Houdini took the younger Frank Clinton under his wing. “Dad said Harry was really not a very personable person, (however) for some reason he saw something in him.”

Janet Clinton — who would keep her maiden name for the stage — auditioned and got the part, reputedly debuting as the youngest child to perform magic on television, just after turning 8, in 1947.

Goldbach described her father, who diligently prepared her for the performance, as a man dedicated to his art; the year he retired from magic, she said, he played 412 shows.

“He’d come home from regular work and have dinner, and both my mom and my dad would put on their evening clothes — mother a gown and father a tux — and off they’d go to play shows.”

Goldbach, who would also go on to perform for military audiences, said her father viewed being a magician as a way to express his patriotism after the death of his brother in World War I. “He went out almost every night and played shows for the USO,” she said. “He felt that was his way of helping.”

A hit in front of the cameras, young Janet Clinton was invited to be a contestant in various television talent contests popular at the time.

She won them all, and her career continued gathering steam. “I performed for children, and I performed for families and adults; I changed each show according to the ages,” she said. “I did a lot of birthday parties, and often I would have three or four shows in one day, which is a lot of packing and unpacking.”

The tricks Janet Clinton performed were always very visual, she said, adding, “My whole way of thinking about entertaining was to do just that — to entertain, not to fool.”

Magic, she said, should be “something that makes you just have a good time. Everyone can forget the things going on in the day and enjoy coming into a magical world.”

Goldbach, who as Janet Clinton was chronicled in “Cosmopolitan,” “American Girl,” “Junior Scholastic” and other national publications, said she was probably the world’s only magician who never cared much for card or coin tricks.

One time, Goldbach said, she and her dad divided her daughter into thirds. “I removed her middle and put it on a shelf,” she said.

Despite her professed dislike of card tricks, she described one she performed: Three cards selected by an audience member are shuffled back into the deck before Janet Clinton tosses the deck into the air, impaling the three cards on the end of a sword on the way back down.

“For me, that’s a more interesting way of finding the cards,” she said.

Janet Clinton and Richard Goldbach married in 1960. As well as New York and now Suffolk, they have also lived in Massachusetts, Alabama, Norfolk, Pennsylvania and London; Janet Clinton has been known and loved as a magical performer in many places.

In Mobile, Ala., she became known as “the South’s leading lady magician,” and adopted the stage character “Pixie,” whom children would call out (Hey, mom, there’s Pixie!) as she walked down the street.

For a span of her career, Goldbach said, she averaged 250 shows a year. The International Brotherhood of Magicians named her Stage Magician of the Year for 1985.

“My favorite library shows were here in Suffolk,” Goldbach reflected. “The children were so much fun.”

Janet Goldbach now paints. She has studio space at Smithfield’s Arts Center @ 319. Her landscapes and portraits adorn the walls of her home.

Having retired at the age of 50, she no longer performs magic, saying she realized retirement had to be “all or nothing.”

“I finally decided to let it go,” she said. “My family comes first; the magic now is a wonderful thing to reflect on, and if there’s a magician around I want to talk and talk to them. It was a big part of my life.”

Larry Saint presents his scale model of the Nansemond River Lighthouse to a packed house in at the CE&H Ruritan... read more