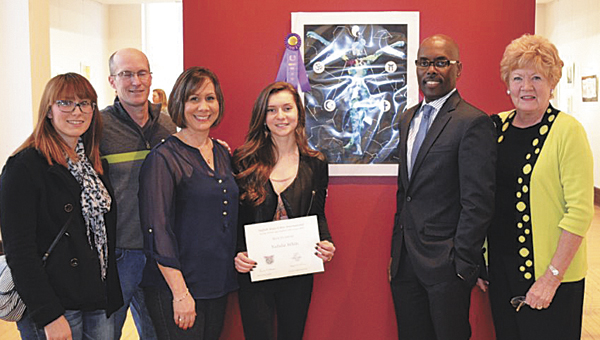 “It caught me off guard,” she said. “It was really exciting, though, also.”

White won the contest with her painting “Universal Woman.” She used the form of a woman to display a universe made up of smaller parts embodied in one being.

“I’m really into drawing figures and bodies,” she said. “I thought about connections with the theme, and I thought of stars and how they connect.”

White received her award at a reception at the Suffolk Center for Cultural Arts, where the exhibit included more than 100 works created by students.

“I’ve been into art for as long as I can remember,” White said. “I’ve always been interested in art, but recently, around eighth grade, is when I started doing projects and actually making art that looked good.”

White, who is 16 and plays field hockey at Nansemond River, said she is considering a career in the art field.

“It would be fun to continue doing something I like,” she said.

First place in the poetry contest went to Ria Khandpur, and first place for essay was awarded to Cole Dignard. Both Khandpur and Dignard are from Nansemond-Suffolk Academy.

All three winning works will be forwarded to the Sister Cities International competition being judged in San Jose, Calif., this summer.