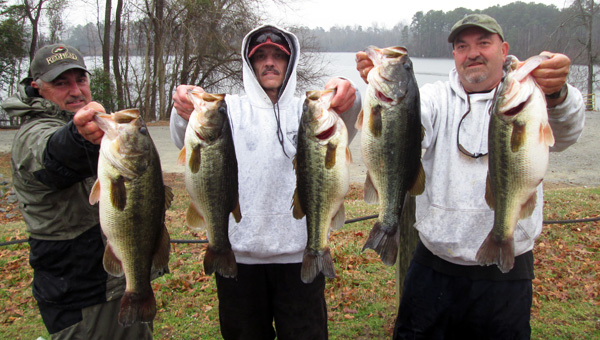 There is a rich fishing tradition that is renewed each Sunday and draws some of the finest anglers in the area and beyond to the bass fisheries of Suffolk.

The competition has gone by different names during the past 50 years, but is currently known as the Suffolk Singles/Doubles Tournament.

About 10 minutes before sunrise, a group of fishermen gathers at the BP truck stop on Pruden Boulevard, and the tournament winner from the previous Sunday pulls a table tennis ball from a hat.

The ball represents one of five bodies of water in Suffolk: Lake Cohoon, Lake Meade, Burnt Mills Reservoir, Lake Prince and Western Branch Reservoir. Not until the ball is drawn do they know where they will fish that day.

The entry fee is $35 per boat and $50 on the last Sunday of every month, with 100 percent payout in every case. Each week, $10 from each person’s fee goes to whoever catches the biggest bass, and the rest goes to the one- or two-person team catching the five bass with the highest combined weight.

Caught fish must be kept in an aerated live well, weighed at 4 p.m. and released back into the lake from which they were caught.

Anybody is welcome to come, and the rules never change.

“And I think that’s why we have such a strong group,” Clark said. “You know what you’re getting involved in when you show up to fish.”

The year-round tournament is held with incredible faithfulness, rarely being canceled due to weather, and it features equally faithful participation.

“We’ve had days out there before where the lakes are partially still frozen, and we get 15 boats,” said fisherman Kevin Mills.

Clark said the tourney averages 15-25 boats in the spring and the fall, 10-15 in the heat of the summer and 5-8 in the cold winter months.

Anglers come from all over Hampton Roads and one even travels from Richmond to compete in the event.

Mills, of Chesapeake, said he enjoys participating, because bragging rights are on the line, even though nobody really does any bragging.

Clark, also of Chesapeake, said, “The thing that I like most about the tournament is the competition and the camaraderie.”

He added, “We have some of the best lakes in the country out there, and it’s world class.”

But one of the great things about the Singles/Doubles is its open format. On any given Sunday, anyone with the $35 entry fee and a fishing boat can join the fun — and maybe even win the prize. And it all starts with picking a ball out of a hat.