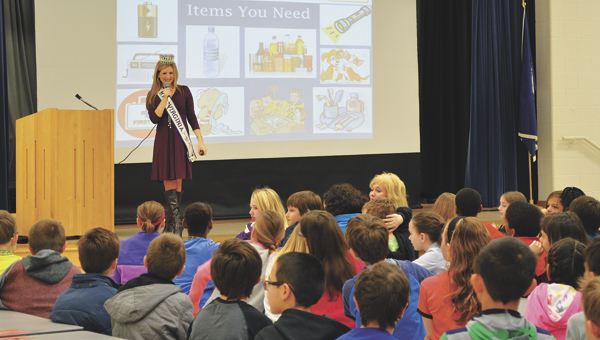 Cheryl Nelson, Mrs. Virginia International 2014, speaks to a school group about the importance of being prepared for natural disasters.

As Mrs. Virginia International 2014, Smithfield’s Cheryl Nelson is using her high-profile platform to urge folks to prepare for the looming hurricane season.

The Emmy-nominated former broadcast meteorologist with WAVY, from 2007 to 2010, says the mission is a good fit for her training and her passion.

“When I was going for the title of Mrs. Virginia International, I had to have a platform,” Nelson said. “Being a meteorologist, I chose natural disaster preparedness. It’s something I have always been passionate about.”

Though forecasters predict a below-average hurricane season — June 1 through Nov. 30 for the Atlantic — due to a developing El Nino weather pattern, Nelson says folks shouldn’t let complacency seep in.

“Personally, I don’t like the prediction,” she said. “It’s an inexact science, and last year an above-average season was predicted, and we had only two hurricanes.

“People let their guard down and don’t take it seriously. But you have to remember, it only takes one.”

Recently, Nelson has been spending a lot of time on the road, connecting with Virginians and helping spread the message of preparedness.

Her travels are also taking her outside the state. On Thursday, Nelson was driving to Tallahassee, Fla., to fly on the P-3 Hurricane Hunter with the director of the National Hurricane Center.

She’s also an official ambassador for National Oceanic and Atmospheric Administration’s Weather-Ready Nation program, and a “proud partner” with the International Association of Emergency Managers and the Federal Emergency Management Agency’s www.Ready.gov.

Given the nature of her mission, Nelson is well placed to gauge to level of preparedness out there: Children are more likely to know what to do in the event of a major hurricane, and how to prepare for one, than adults, she says.

“They (children) know and they understand the risk,” she said. “They are passionate about it. The adults, on the other hand — depending whom you ask, the average Virginian doesn’t know what they need in their (hurricane preparedness) kit. They know a few items.”

On May 31, Nelson will be a special guest at Norfolk’s Harbor Park for a Norfolk Tides game dedicated to hurricane preparedness. There’ll be public service messages from local and state emergency managers, along with giveaways and vendors, Nelson said.

“I believe I’m throwing the first pitch,” she said, adding that eight years of softball as a youngster should serve her well.

According to the governor’s office, emergency kits should include three days’ worth of bottled water and non-perishable food for each person, a battery-powered or hand-cranked radio with extra batteries to hear emergency information, flashlights and extra batteries, a first aid kit and an extra supply of prescription medicines.

“It’s very common here in Virginia to have flooding during hurricane season. If your homeowner’s insurance policy doesn’t include flood insurance, talk to your agent now about adding it,” Jeff Stern, state coordinator of emergency management, said in a news release.

“You don’t have to live in a high-risk area for flooding to affect you, and flood insurance is the best protection for your home and belongings.”

A good time to furnish an emergency kit is the annual Hurricane Preparedness Sales Tax Holiday, May 25 to 31. Visit www.vaemergency.gov for more information.

“The prediction of a below-normal hurricane season should not be taken to mean Virginia won’t be impacted this year,” he states.

“Let’s all remember that it only takes one storm to cause severe damage and even loss of life.  Everyone should get ready now for this hurricane season.”

It’s time to start learning or brushing up on your bridge skills in time to support the American Contract Bridge... read more