The Suffolk schoolboy’s drawings that inspired one of the most recognizable advertising icons in America now will be immortalized by the Smithsonian Institution.

As a young teen in 1916, Antonio Gentile won $5 in a contest to create a trademark for Planters Peanuts. He sketched 11 drawings of a peanut with arms, legs and a face doing activities including serving peanuts, singing a tune, riding a toy horse and walking with a cane. 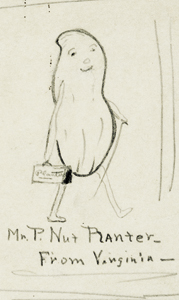 One of the original Mr. Peanut drawings by Antonio Gentile. (Courtesy Robert Slade)

Amedeo Obici, an Italian immigrant who founded Planters Peanuts, awarded Gentile the prize and had a graphic artist buff Mr. Peanut’s dignified image by adding a monocle and top hat. The friendly nut remains the spokes-character of Planters to this day, although he’s undergone many changes through the years.

“They are widely acknowledged to be the experts at preservation of materials, especially documents,” Slade said. “The drawings were on notebook paper, which is highly acidic and needs TLC.”

Slade also said the family wanted to “put them in a location where there might be greater access over time, because they weren’t doing anybody any good sitting in my house.”

Slade said the Smithsonian has several ideas for how it might display the drawings, including as part of an upcoming children’s exhibit that would “teach children that even at a young age, you can have an impact,” Slade said.

“There’s also the potential to have it as part of an exhibit down the road they’re going to do on immigrants,” Slade said.

The Smithsonian also assured Slade the drawings would be available for loan, so they could be displayed elsewhere, for example in Suffolk.

“That way the community can still share in the drawings, and we meet our family goals of preserving them,” Slade said.

He said it was important to the family that the Smithsonian recognized not only the importance of the drawings but also the rich life Gentile led after he created Mr. Peanut.

“It was gratifying to have them take recognition of the importance of the drawings and the role my family played — particularly Tony — and the relationship the whole family had with Mr. Obici,” Slade said. “From humble beginnings in a small community like Suffolk, big things can happen.”

Antonio Gentile’s parents, also immigrants from Italy, were friendly with the Obicis, despite the economic disparity between the two families, according to Slade. Obici took Antonio under his wing, paying for the 1920 Jefferson High School valedictorian to further his education.

Gentile went on to graduate from the University of Virginia and obtain a medical degree. He became a respected surgeon at Elizabeth Buxton Hospital in Newport News, where he was one of the youngest surgeons admitted as a fellow in the American College of Surgeons.

His patients, both those who could afford to pay and those who could not, loved him equally, and he gladly accepted the payment of gratitude from those who had nothing else to give, Slade said.

In December 1938, he married Delcy Ann Maney, but he died of a heart attack less than a year later while on duty at the hospital. The couple had no children.