It’s all about ‘Me’ for Dignard

A rising junior at Nansemond-Suffolk Academy has been named as a finalist in the Sister Cities International 2014 Young Artists and Authors Showcase. 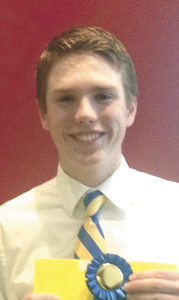 Cole Dignard, who lives in Chesapeake, was one of two finalists in the poetry category. As part of an English assignment, he wrote about his place in the wider world, and how it isn’t so insignificant. Entries were encouraged to reflect the theme “Connect globally. Thrive locally.”

Dignard explained his creative process: “I started thinking about the theme … and I started asking myself some questions about that.”

“I really got, ‘How can I change the world?’ From that, I picked out the word ‘I.’ Then I thought, ‘It isn’t really strong enough;’ so the word ‘me’ dropped into my head. and I thought, ‘Yeah, that’s strong.’”

“That’s how I got the structure for my poem,” he said.

Dignard says poetry is his favorite part of English at school. “I don’t know, it just kind of comes naturally to me,” he said.

Another poem he wrote in class, last year, was about baseball, after visiting the National Baseball Hall of Fame.

Dignard said he writes about “things that happen in my life, and things that I like.”

He  and his family learned about his success when a reporter called Thursday.

“It’s really surprising,” he said. “So far in my life, this is the biggest achievement I have done. It’s just kind of flown out of me.”

Dignard said he wants to write a lot more poetry as he figures out what he wants to do with his life. “Maybe I have a little bit of talent in it,” he said.

He said he can sit down anytime and write a poem, but “if I’m inspired by something, I feel I can write better, and have more ideas about what I’m trying to say.”

miniscule to the world.

What difference can I make?

Small, unknown, yet not without power

possessing the ability to question and to dream,

to imagine, invent, revolutionize and to bring about change.

created by the power of the individual,

one of the seven billion

in my town, here it