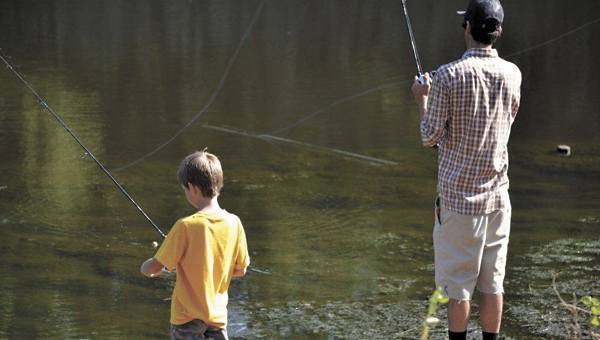 Keaton Owens, left, and Nick LaCascio participate in the 2013 Thomas J. O’Connor IV
Memorial Fishing Tournament. This year’s event will be held from 8 a.m. to noon on June 21 at Johnson’s Gardens
on 3201 Holland Road.

The family of Thomas O’Connor started a fishing tournament to help honor his memory last year, and this year the family has expanded its efforts.

The second annual Thomas J. O’Connor IV Memorial Fishing Tournament will be held on June 21 from 8 a.m. until noon at Johnson’s Gardens on 3201 Holland Road and will now feature larger money prizes and a silent auction.

After O’Connor passed away in May of 2013 at the age of 36, his family began thinking of ways to keep his memory alive.

His brother, Jett Johnson, said, “Thomas was an Eagle Scout, and the majority of men in my family were Eagle Scouts, and so naturally that was the first thing that we thought to do was to start a fund for the Boy Scouts in the local area.”

He noted the fund could also specifically help Scouts needing financial help to go to summer camp, the expense of which he and his relatives recalled is on the rise every year.

“And we weren’t able to (help) last summer because we were building the fund, however, we’re going to be able to make a pretty substantial donation this summer, and then going into the future, we’ll be able to make donations every year thereafter,” Johnson said.

He said they accept donations to the fund throughout the year, and proceeds from the tournament and auction will go directly into the fund.

Building the fund through a fishing tournament was just another nod to one of O’Connor’s favorite activities.

“We’ve always spent countless hours out at our family farm fishing, so it all tied together well,” Johnson said.

The shoreline-only fishing tournament will take place on six separate ponds, starting as soon as participants register on-site at 8 a.m. The event is open to everyone, with a $25 fee for adults. Children 12 and under get in for free and are also eligible to win the tournament.

“We’ve upped our prize, so our first prize is a $250 cash prize,” Johnson said of the award that goes to the participant with the top two bass, by weight.

The second prize has grown to $100, and the third has moved up to $75. There may also be special prizes for other catches.

“We’ve added a silent auction this year that’s going to start at 10 a.m. and go until 12:30, and we have about 20 really great items for that,” Johnson said.

Johnson said the items include everything from art to jewelry to furniture.

Last year, many people attended, some of whom were not fishermen. Johnson assured games, entertainment, raffles and more would once again be provided for their enjoyment.

Lunch items can be purchased with cash at 11:30 a.m., and awards will be presented at noon.

For more information, contact Jett Johnson at 651-7717 or email him at JettRJohnson@gmail.com with “Fishing Tournament” in the subject heading.

Four members of the Nansemond-Suffolk Academy boys’ lacrosse team were selected to the all-state first team after aiding the Saints’... read more