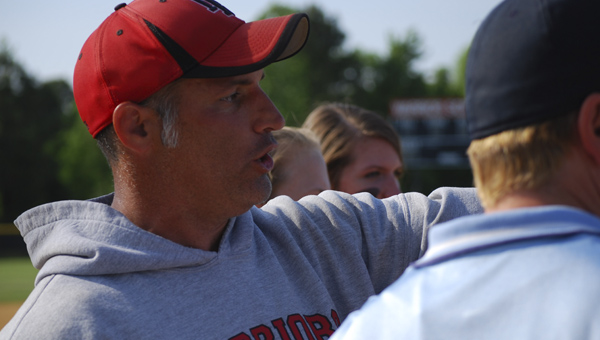 Gabe Rogers was named the 4A South Region softball Coach of the Year after the continued renaissance of Nansemond River High School’s softball program was punctuated this year by its first-ever regional championship. (Submitted photo)

The softball team at Nansemond River High School followed up its 18-1 regular season with its first-ever regional title, and Lady Warriors coach Gabe Rogers got the appropriate recognition from his regional peers.

They voted him the 4A South Region Coach of the Year.

“The success of the kids is what allows not just myself, but the rest of the girls to earn the individual awards,” Rogers said. “If we don’t win, we’re not going to get those honors.”

And Nansemond River won in a variety of ways during the regional tournament.

It convincingly defeated host Deep Creek High School 14-3 in the quarterfinals, battled for an eight-inning 2-1 state-qualifying win at Powhatan High School in the semifinals and came back in the seventh to beat visiting Grafton High School 5-4 for the championship.

This coaching honor for Rogers comes close on the heels of a similar one he received from his peers at the conference level. Like he did in reaction to that recognition, Rogers deflected credit to his assistant coaches, Dave Glover and Mike Lowers, as well as junior varsity coach James Vann.

“They’re just a tremendous support group for what we do, and we all work so well together,” Rogers said. Citing the trust he has in them due to their extensive knowledge of the game, he said, “It’s a big advantage for the girls and for our team to be able to have that much knowledge in the dugout.”

Lowers returned the compliments to Rogers, while noting how well-deserving the head coach was of the regional accolade.

“He’s a tremendous coach,” Lowers said. “He knows the game very well, and it’s a great experience just to be coaching beside him.”

Giving a specific reason for why Rogers merited the honor, Lowers said it was due to “his ability to take the talent that we have and motivate it, to get the most out of the girls that we can get.”

One of those girls was sophomore KateLynn Hodgkiss, who delivered an inspired performance during the regional title game. She said Rogers deserved the award, highlighting the team’s improvement in comparison to previous years.

“It’s proven that him coaching us has made us better ball players,” Hodgkiss said.