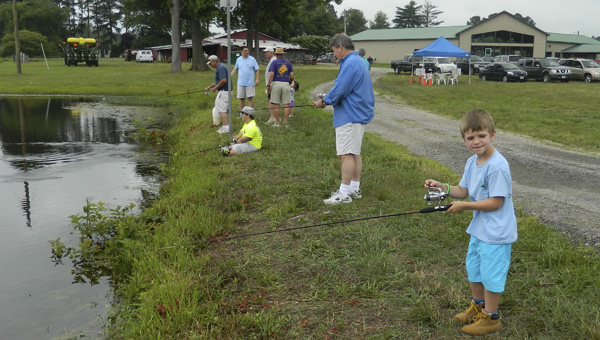 The best-laid plans and a supportive community each got a chance to shine on Saturday, a day that was otherwise cloudy, promising thunderstorms.

But the rain never came down in any significant measure, and the weather turned out to be great for the second annual Thomas J. O’Connor IV Memorial Fishing Tournament held by his family at Johnson’s Gardens.

“I think it went above and beyond our expectations,” said Jett Johnson, a brother of O’Connor, who helped organize the event. 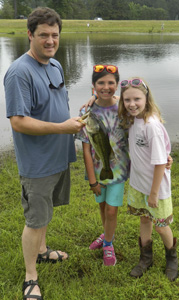 Aaron Duman, a best friend of the tournament’s namesake, holds a catch he got during Saturday’s second annual Thomas J. O’Connor IV Memorial Fishing Tournament at Johnson’s Gardens. He was joined by his daughter Bradleigh, far right, and family friend Caroline Morgan.

O’Connor passed away in May 2013, and his family put together the first edition of the fishing tournament last July with limited time to prepare.

“We really didn’t reach out to as many people as we would have liked,” Johnson said.

This year, they were able to, and he said, “I think the payoff was well beyond what we thought it was going to be, mainly just due to the generosity of everyone.”

The event raised more than $9,000, which Johnson said was more than triple what it brought in last year. The money will go to benefit the Boy Scouts of America, an organization of which O’Connor was once a part as an Eagle Scout.

The addition of a silent auction this time proved to be very successful, appealing strongly to those attending who may not have been interested in fishing but wanted to remember O’Connor and raise money for the Boy Scouts.

“I think that really added what we needed to add to make sure we kept people entertained,” Johnson said. “We had over 30 items and the majority — all but maybe a few — came from local businesses here in Suffolk.”

Every single item sold, with multiple pieces of artwork going for $200 to $300 apiece. The auction accounted for more than $5,000 of the money raised.

Tim Johnson, O’Connor’s stepfather, expressed his gratitude to the community for its huge role in making the event such a success.

“We live in such a wonderful place,” he said. “We love Suffolk. I can’t say enough good.”

He also said he enjoyed seeing so many young people involved.

Children 12 and under got in for free, and Jett Johnson estimated 20 to 30 of them were competing in the tourney beside family and friends.

He said plans are already being formed to add a youth tournament specifically for them next year, with separate prizes.