Police are seeking assistance from the public in identifying and locating a suspect who stole electronics from a child care business last month.

The break-in occurred at Quality Time Child Care in the 2000 block of Meade Parkway sometime between Saturday afternoon, May 24, and Tuesday morning, May 27. 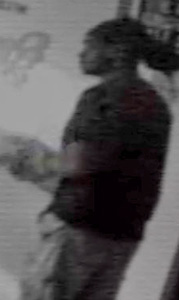 Electronic equipment, including a gaming system and laptop computer, was stolen, according to a city press release.

Surveillance video captured an image of the suspect. Police describe him as a black male in his mid to late 20s, approximately 6 feet to 6 feet 1 inch tall, weighing about 200 pounds, and wearing a black shirt, long khaki cargo shorts and long dreadlocks that were visible under a black head covering.