The Nansemond River High School softball team has dominated the all-conference and all-region honors this year, and though the Lady Warriors did not win on the state level, they still had two players earn their way onto the VHSL Group 4A All-State Softball Team.

Sophomore infielder KateLynn Hodgkiss and junior outfielder Morgan Lowers both made the honorary 14-member squad, which stood by itself this year. 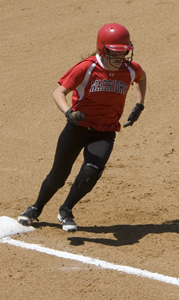 In a change accompanying the Virginia High School League’s realignment, state honors this year did not include a second team, honorable mentions or individual titles like player, coach or pitcher of the year.

Breaking down why first-time state honorees Hodgkiss and Lowers made the 14-player cut, NR coach Gabe Rogers said, “I think what a lot of people looked at was the consistency with which they maintained their level of play.”

During the regular season, they were among their team’s most prolific run scorers, as Hodgkiss scored 24 and Lowers scored 25. They were also among the team’s leaders in hits, Hodgkiss producing 27 and Lowers 28.

“They had a great regular season, and then, not only that, they continued that consistency through the playoffs,” Rogers said.

In the six post-season games, Hodgkiss led the Lady Warriors with eight runs scored, Lowers led them with seven runs batted in, and both tied for the team lead in hits with 10 apiece.

Hodgkiss registered a bunt single in the bottom of the seventh inning in the regional championship game that turned into the game-winning hit.

“Obviously, that sticks out in people’s mind,” Rogers said, referring to all-state voters. “Not only that play, but the way she played in the entire game.”

She exhibited what she does best in the state semifinal, leading off the bottom of the first with another bunt single. Rogers praised his leadoff hitter this year for making defenses pay when they moved in or out.

“She’s got good enough speed that she makes routine plays become a challenge,” he said. “More often than not, she’ll find a way to get on base.” 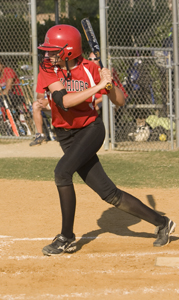 “That was kind of the Morgan that I’d really been wanting to see,” Rogers said. “We want her swinging the bat. Yeah, she can play small ball, but she hits the ball really well.”

Like Hodgkiss, Lowers finished that game having gone 2-for-4, but she also had an RBI and two runs scored.

Additionally, Rogers said Lowers “had a couple plays in the outfield that kind of really stood out in people’s minds.”

The Virginia High School Coaches Association voted on its own set of all-state honors. Hodgkiss and Lowers made its first team, while sophomores Lauren Davis, Lauren Maddrey, Jaclyn Mounie, Calah Savage and freshman Katelyn Biando made the second team.

This year’s Lady Warriors team was the most decorated in the history of Nansemond River’s softball program.