LHS grad teaches for the nation

A Lakeland High School graduate hopes to help underprivileged youth devise goals and achieve them as an educator with Teach For America.

Antonio Smith Jr., a 2009 Lakeland graduate, is near the end of a five-week training program in Oklahoma.

Then, right before he starts with Charlotte-Mecklenburg Schools as a high school math teacher, he’ll receive a further two weeks of training with the division. 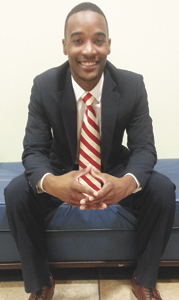 Lakeland High School graduate Antonio Smith Jr. has joined Teach For America, which will take him to unprivileged classrooms in North Carolina to help reverse the educational malaise and underperformance of low-income students. (Submitted photo)

“We have extensive daily training for those five weeks,” Smith said of his time in Oklahoma. “Basically, we are teaching summer school here.”

While 15 students per classroom has been the norm during training, Smith expects to front 20 to 40 pupils when he begins teaching next month.

Smith majored in applied mathematics at North Carolina A&T University, giving him the knowledge to teach his chosen subject effectively, he says. He still has to take a state test to become a certified teacher.

“I took a different route” toward becoming an educator, he said. “I didn’t want to have an education degree to limit myself.”

Smith said he specifically sought out an opportunity that would allow him to teach in a low-income community.

“Doing community service projects, tutoring and mentoring back in college made me feel the need to do that,” he said.

He said he also recognized a need for more black male educators.

The task ahead of Smith is not an easy one: According to the National Center for Education Statistics, compared to their higher-income peers, students on the free and reduced lunch program are almost a year behind in math when they reach the fourth grade.

“Our corps members and alumni have made a meaningful impact with their students and communities over time,” Elisa Villanueva Beard, co-CEO of Teach For America, stated in a news release.

“I can’t wait to see the leadership, passion, dedication and innovation this year’s corps will bring to their classrooms nationwide.”

Smith, whose sister teaches at Suffolk’s Elephant’s Fork Elementary School, said, “My main focus basically is to motivate those students who think that their resources are limited.”

He said he wants to get them thinking critically, and “help them build that confidence” so they can set and achieve goals, “to be successful in the world.”