Thirteen-year-old Leontre Bailey of Suffolk helped his team go 7-2 by putting forth an impressive effort across all of the major statistical categories, averaging eight points, eight assists, seven rebounds, four blocks and four steals per game. 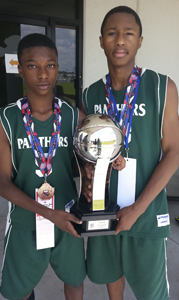 Thirteen-year-olds Lamareon James and Leontre Bailey formed a potent backcourt that helped the seventh-grade Virginia Panthers Academic Basketball Club place among the top five teams in the country at the recent 2014 AAU Boys’ Basketball National Championship in Memphis, Tenn. They hold the trophy that the team earned for its fifth-place finish. (Photo submitted by Darius Bailey)

“I felt great, defensive-wise,” he said. “Offensively, I could have done a little bit more, but it was still great.”

Lamareon James, who splits time in Norfolk and Suffolk, is a sixth-grader who was playing up a level. His numbers seemed to contradict that fact, however, as he averaged 15 points, four rebounds, four assists and three steals per game.

“I felt like I did a great job playing up in seventh grade with bigger people,” he said.

Panthers coach Darius Bailey said the team did great overall during the tourney.

“We were just a few turnovers away from making the final four,” he said.

He was particularly impressed because of the lack of experience on the roster.

“A lot of the kids on the team, this is their first AAU nationals ever, and they finished fifth in the country,” he said.

In the course of qualifying for the national level, the squad took second in the Virginia state tournament.

Coach Bailey underscored the importance of his son’s contribution to the team.

“He’s been the leader since second grade,” Bailey said. “We’ve been building around him.”

He brought leadership to the squad because has played at the national level before. He made it there in 2012 at the fifth-grade level.

The coach praised his son for his resilience in his first chance to play in the tournament. Leontre was not able to make the first game of the tournament, which the team won, but arrived for the second game after two extended periods of time on the road and little rest in between.

The Panthers lost the game by 10 to a team from Florida, but Coach Bailey said Leontre had an outstanding game, producing eight blocks, four steals and six rebounds.

The two teams faced off later for fifth place, and this time, the Panthers won, 77-61, with Leontre limiting the other squad’s top scorer, who was being scouted.

“In that game, he only had six points,” Leontre Bailey said. “In the first game, he had like 30.”

Of Lamareon, a shooting guard, Coach Bailey said, “He’s a left-handed kid, and he’s just explosive. He’s got that explosive step like Dwyane Wade had.”

The coach said Lamareon’s best game came against a team from Ohio, in which he scored nearly 20 points, and showed toughness.

“He actually got stepped on after he scored a layup and the referee tried to keep him out of the game, but he’s a competitor man,” Coach Bailey said, adding that Lamareon returned to help his team win.