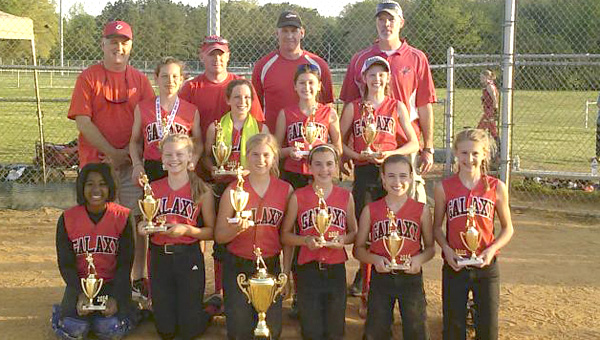 The Suffolk-based Galaxy Fastpitch travel softball organization has been no stranger to success during its 2013-14 season. This has been in large part due to the program’s 10U and 12U programs that have combined for eight tournament championships, including one state title.

The Galaxy Fastpitch 10U team has had a phenomenal campaign, with a glowing record of 51-17-2. The Virginia National Softball Association State Rankings currently have the squad at No. 1 among Fastpitch 10U teams. 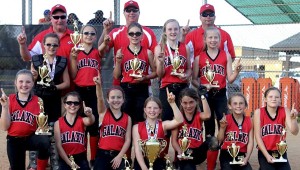 Manager Darryl Inscoe shared why he thinks his players have been so successful, aside from good coaching, of course.

“I think that they work hard, they have strong work ethics,” he said. Having familiar teammates has helped, as well, as he added that the majority of the girls have “played together at least four or five years.”

The team’s next four tourney wins came in the spring and summer at National Softball Association events: the Virginia Cup in Richmond, the Peninsula Season Opener — Play for a Cure in Newport News, the Fort Magruder Colonial Invitational in Williamsburg and the Historic Triangle Summer Classic, also in Williamsburg.

Later this month, Galaxy Fastpitch 10U will play in the NSA Class A World Series in Spartanburg, S.C.

The 12U team for Galaxy Fastpitch has used its speed to produce a 25-16-3 spring record. Most notably, the team went 5-1 to win the NSA’s 12U Class B State Championship held in June in Sterling.

Near the end of April, the squad also went 5-1 in Richmond to win the NSA’s Virginia Cup.

Manager Mark Cagle pointed to the bond between his players as a reason for the 12U team’s success.

“They like playing with each other,” he said. “We’ve had a core group for two years now.”

Only three players on the team were on the older end of the 12U level, though. This meant people like Suffolk’s Cameron Pagan, one of the three senior players, were particularly important.

“She brings some experience,” Cagle said of Pagan, a pitcher. “She’s usually able to throw strikes.”

He said she has basically been the No. 2 pitcher on the team and has thrown throughout the spring season, especially.

Cagle said, “We try to emphasize keeping the team small and everybody getting enough playing time and getting better.”

He said speed on offense has probably been his team’s greatest strength, but it has also had a pretty solid defense most of the time.

Contributing to that defense has been catcher and third baseman Lexy Massey of Suffolk.