The world of basketball has been changed by a rising tide of player transfers at every level of the game — and now more than ever in high school.

Sometimes the moves are made in the best interests of the student-athlete’s academic future, but Nansemond River High School coach Ed Young said a lot of times, the changes are blatantly sports-motivated. 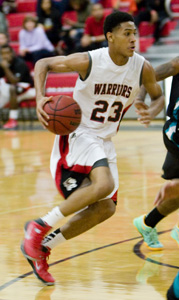 “It has nothing to do with academics,” he said, though parents and youths will hide behind that statement, “because it’s a little easier for people to understand.”

He listed a variety of factors contributing to how the transfers come about. Sometimes an Amateur Athletic Union coach will encourage a student-athlete to switch schools. Sometimes a chance to get more time to develop and more face time with scouts is the motivator.

Increasingly, rising senior high school student-athletes are transferring to private schools where they can re-classify as a junior. They are allowed to do this because the private school offers a course not provided to them at their previous school, and they presumably need more time to take it.

It also means they have another year of playing eligibility.

“In that case, the feeling is for recruiting purposes, a kid may get better offers, because he’ll have better numbers,” Young said.

Young also noted modern NBA free agency is likely serving as a role model for high school players who copycat stars, teaming up to form super-teams with the goal of winning a myriad of titles.

Colleges, too, have been experiencing a significant amount of student-athlete transfers.

Among the 331 NCAA Division I schools last year, there were 437 basketball transfers, according to Young.

But the transfer-heavy culture seems to have created negative consequences even for those who are simply making the switch for academic purposes.

Some college recruiters have shared with Young the reaction of their bosses.

“Presidents and athletic directors are saying, ‘Wait a minute. Why are all these kids transferring? What is going on? We can’t have it, because it hurts the graduation rates,’” Young said.

He has experienced this wariness from scouts firsthand with regard to Scott Spencer, a star for Nansemond River’s team last year as a junior. He is transferring in the fall to an all-boys private college prep school in St. George, Blue Ridge School, and re-classifying as a junior.

Spencer’s mother, Montria Spencer, agreed with Young that for many families, athletics are likely the motivator these days, but noted that academics truly were the driver in this case.

“It was basically because we saw the academic program at Blue Ridge and the classroom setting that they have at Blue Ridge,” she said. “They have 130 students with an average of eight to 10 students per classroom.”

While Young disagreed with the move by the Spencer family, he encouraged the Division I scouts not to stop recruiting him, but they remained wary.

“The colleges are saying it’s not so much that particular kid, it’s the phenomenon of transfers,” Young said.