His words into action 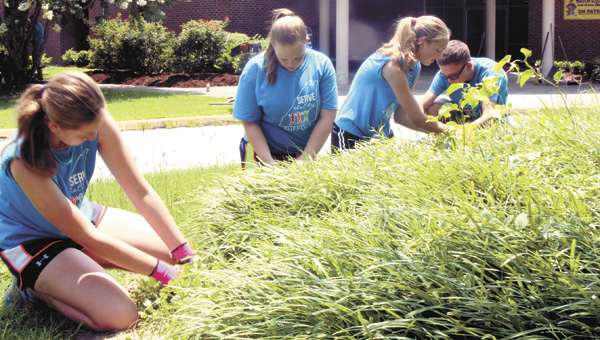 Two city public schools are getting a summer spruce-up this week thanks to volunteers from a local church.

The purpose of Serve the City, as the ministry has been dubbed, is to put the words of Jesus into action at the local community level, says Jerry McLeod, senior associate pastor at Southside Baptist Church.

“We believe that the light that shines the farthest shines the brightest at home,” McLeod said.

“Jesus told us we are to love our neighbors as our own, (and) this is a mission effort right here at home.”

Kilby Shores Elementary and Forest Glen Middle schools were selected for the ministry simply because they are close to the church, which is located on Carolina Road, said Terry Violette, crew leader Monday at Kilby Shores.

“The schools have provided the materials and we are just providing the labor,” Violette said, adding that the church community donated some items for the work.

All wearing fluorescent green T-shirts with the ministry logo, Violette’s team inside was painting the walls.

“On the outside we are working on the curb appeal,” he said. Many pairs of hands were pulling weeds, pruning trees and spreading mulch.

It’s the first year the ministry has operated, Violette said, and the plan is to make it bigger every year.

“It has nothing to do with our church,” he said. “Our goal is to love all our neighbors and our community, and to serve them.”

Steven Effler, 16, said, “As a Christian, it’s our job to go out into the world. Coming to church is good, but what we need to be doing as Christians is going out more. That’s what this whole thing is about — to change our community for God.”

All told, about 160 volunteers, many of them teens, are involved in the ministry, McLeod said.

“He came not to be served, but to serve and to give his life as a ransom,” he said. “We are most like Christians when we serve others.”

Later this month, he said, about 10 of the volunteers are heading to Haiti on a mission trip. “This is good preparation for them,” McLeod said.

Southside and several other churches are also hosting a Backyard Kids Club at Planters Park, 515 York St., from 9 to 11 a.m. Mondays through Fridays.