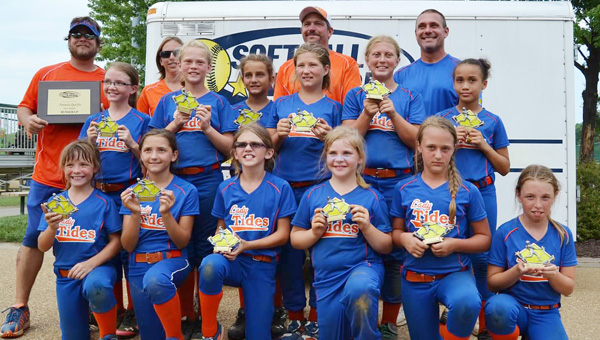 Three months after it ended a long hiatus, the Tidewater Lady Tides travel softball team is back on the road, and 10U coach Thomas Judkins already likes what he is seeing from his young players.

They have competed in one open tournament to warm up, then jumped into the fray with two travel ball tournaments. Currently the 10U team holds a 7-7-1 record.

“I couldn’t be happier at the progress these girls have made in becoming teammates and how they’re gelling together,” Judkins said.

While his team got more of its wins from the previous two tournaments, he said it showed tremendous improvement in the Softball Nation Peninsula Qualifier this past weekend in Newport News. The Lady Tides 10U squad finished as runner up in the silver bracket.

They have faced the talented Galaxy Fastpitch 10U team three times in the past two tournaments.

In the latest meeting, last weekend, “We were able to at least hold them down for four innings and make a better ball game of them before our pitchers got tired,” Judkins said.

It seemed the reason Judkins helped reestablish the Lady Tides was beginning to show.

“Tidewater Lady Tides is a nonprofit organization that kind of fell in the lap of my friend Darick Cherry,” Judkins said.

Before shutting down, the program had existed back in the late 1990s when it was based in Chesapeake.

Judkins said he and Cherry, coach of the Lady Tides 12U team, were inspired to re-start the organization from Suffolk, because they felt there was too much talent in the city that did not have a local outlet.

The majority of players on the 10U team are from Suffolk and Isle of Wight County, with one from Southampton County and a few from North Carolina.

Judkins is a certified pitching instructor through Tincher Pitching, which has helped draw players to his team.

“A few of them were coming to me for lessons before the team got started, and then others joined the team, I think, because I had that ability to teach the pitching,” he said.

Ten of the 14 girls on the 10U team are working on pitching, including local players Judkins praised, like Suffolk’s Haley Cisco, Anya Colyer, and Isle of Wight’s Isabella Ward.

He also highlighted Emily Mousso of Suffolk. “Her game knowledge she has at such a young age is big,” he said.

Judkins said Isle of Wight’s Rachel Wells “playing a solid second base was big for us, and Melissa Carr was important for “being tough behind the plate, catching.”

Suffolk’s Emily Fowler drew praise for being a team player, and first baseman Lexi Leyh was spotlighted for contributing with more aggressiveness.

“They play with heart,” Judkins said of his team.

The Lady Tides 10U team will return to action this Saturday and Sunday for the National Softball Association sanctioned Subway Virginia Amateur Sports Commonwealth Games of Virginia in Roanoke Valley.