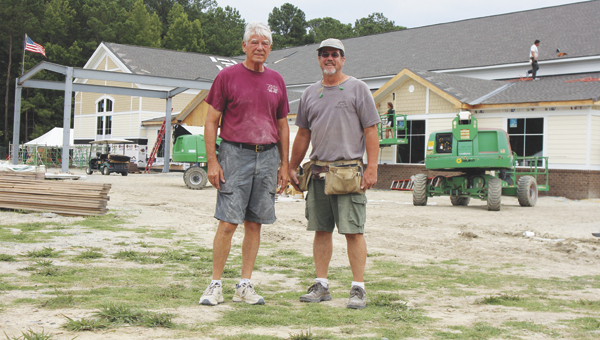 A church has been going up fast near Smithfield. At the construction site Wednesday, L.J. Smith, one of the project’s coordinators, stands beside Harvest Fellowship Baptist Church Associate Pastor Ronnie Bunch.

A volunteer church build that was to involve on the order of 1,250 volunteers during its 12 weeks is nearing completion in Smithfield.

Harvest Fellowship Baptist Church, which grew out of Suffolk’s Nansemond River Baptist Church in 2001, is getting a new building on land the congregation purchased on Battery Park Road in 2005.

The flock has been gathering for Sunday services at Carrollton Elementary School.

It’s the first project in Virginia of the church construction mission of Brookwood Baptist Church in Alabama.

“At this point, we’re probably about 2-1/2 months into the project with Builders for Christ,” said Ronnie Bunch, associate pastor of worship.

Those volunteers are coming to Smithfield from all over: Connecticut, Colorado, Florida, Washington, Alabama and other parts of Virginia, representing about 74 different church entities, Builders for Christ project director Lawrence Corley has said.

The walls are up and the roof is on, Bunch said, and a team will be coming before the end of the month to finish the heating, ventilation and air-conditioning system.

A rough electrical inspection has been completed for the children’s side of the building, Bunch said. A team will be coming from Harvest for the same in the sanctuary area.

“Aside from that, we’re just rolling on,” he said. “We’ve got a plumbing contractor that’s gotten all the rough-end inspection done. We have a brick mason onsite who’s working his way on around.”

Much remains to be done inside the church, Bunch said.

“We don’t know if we are on schedule, behind schedule or ahead of schedule,” he said. “There has been a lot done, but there’s still a lot of work to do.”

From the “spiritual point of view,” Bunch said, “we have seen God doing amazing things, teaching people lessons here on the job site.”

Younger volunteers are learning new skills from older mentors, Bunch said. Some of those are less tangible than others, like self-reliance.

“We are just kind of in the middle of it, but also on the edge of it, being able to see it and observe it. It’s all part of God’s family.”