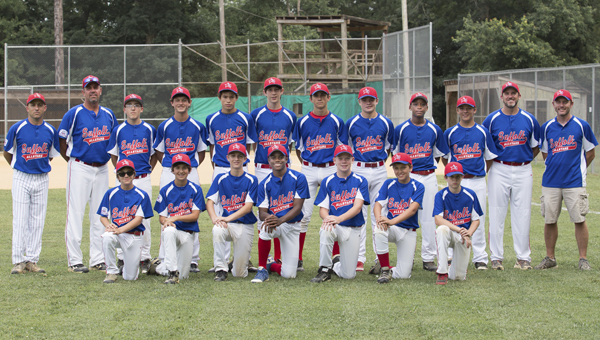 The Suffolk Youth Athletic Association American 13U All-Star team went 3-2 in the double elimination PONY Baseball regional tournament over the weekend in Huntersville, N.C., falling to a stellar Chesterfield team in the title game.

But that description does not express the fortitude that the American 13U team displayed in its final tournament of the year. It is a fortitude that the SYAA squad has exuded throughout its 10-4 all-star season run, which included winning the Pony division of the SYAA Invitational All-Star tourney.

The group played its first game in the 2014 East Zone South Region Pony-13 Tournament on Saturday morning, and manager Mike Barnes said the group did not play to its potential, falling 16-5 to the host team, Huntersville.

But then came the highlight of the tourney for Barnes, which he said was “the response that we had Sunday morning after Saturday’s loss.”

The SYAA team defeated a High Point, N.C. squad 10-4, initiating a string of 19 straight innings in which the local all-stars never lost momentum and never trailed on their way to the championship game.

“They were determined to get there,” Barnes said. “They kept telling us, ‘We’re not going home.’”

Plenty of stars contributed to the result, capping off a season of solid performance.

Barnes singled out Allen for his offensive play throughout the all-star season.

“It just set the standard, if you will,” Barnes said.

Barnes noted Hasson was hurt in Saturday’s game, missed three of the five games, came back cold in the championship and still managed a nice shot out to right field.

Shortstop Michael Barnes showed his defensive capabilities via a fully-extended diving catch of a High Point line drive in the sixth inning, with bases loaded, two outs and Suffolk leading 5-3. It protected his team’s momentum.

The American 13U team had good pitching to fuel its run this season.

“Adam (Briggs) and Noah Floyd were the two guys that were our No. 1, No. 2 pitchers,” Barnes said, also highlighting Bryce Daniels for solid relief pitching.

Cody Anderson made a clutch catch to preserve the 10-run lead and end the game after five innings, saving the arms of Briggs and Floyd in the busy tournament schedule.

Floyd made the 10-run lead happen when he took advantage of errors to steal his way home from first in one extended play.

“When he slid into home plate, that’s when he broke his thumb, and we did not even know that he had broken his thumb, and he played in the next game, the championship game,” Barnes said.

Summing up his team, Barnes said it was “very resilient.”