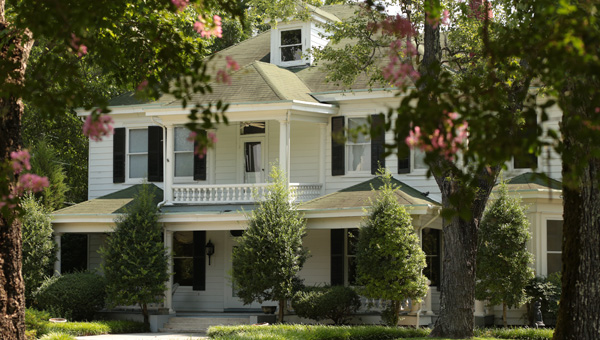 An 1880s-era home built by Capt. Thomas Jefferson Saunders at the crest of a hill above what was then the Western Branch of the Nansemond River and is now the Western Branch Reservoir is for sale in Everets. The home includes features from Suffolk and Richmond historic landmarks.

In the second half of the Victorian era, Thomas Jefferson Saunders, a former sea captain, built his wife and nine children a stately home on the Western Branch of the Nansemond.

Three sides of the house gaze upon what is now Western Branch Reservoir, created as a water supply in the 1960s.

Generations of Nansemond County and later Suffolk citizens have marveled at the home located at 5633 Everets Road, which for the first time in about 26 years is up for sale.

Carolyn Bickham, co-listing agent with Cross Realty colleague Lee Cross, says the house has been on the market for about a month.

If you’re one of the many who’ve marveled at the home’s location at the crest of a hill overlooking the reservoir and you’re interested in making an offer, the owners, former Emergency Physicians of Tidewater director Arthur Chambers and wife Virginia, are asking $750,000.

Arthur Chambers was named medical director of an emergency department in Mississippi in 1998, and the family left the house about five years ago, according to Bickham.

Harry Cross, owner of Cross realty, sold the house to the Chambers in 1988.

“It wasn’t what they were looking for at all,” Harry Cross said. “But it had the room and the space and the location. I said, ‘Come take a look,’ and they fell in love.”

The 5,490 square-foot home was built with six, or possibly seven, bedrooms, two formal parlors, dining room, sitting room beside the kitchen, pantry, and porches the width of the building with two balcony porches above.

The house was built in a “H’ configuration for cross-ventilation, which still cools it; though modern air conditioning and heating have been installed, among other modern conveniences.

Living in the house with their three daughters, the Chambers family installed two large mirrors facing each other in the upstairs hall for a ballet academy, Bickham said.

A feature slightly more odd is a cutout in the door of what was Arthur Chambers’ office for passing through a bottle of Samuel Adams, hamburger and can of Coke.

“They worked on the restoration for about a year and a half,” Bickham said. “Virginia did a lot cleaning the crown molding. They also had renovation experts come in to help — they did make a few changes to the house.”

Each room has its stories, Lee Cross says. “My favorite one is the billiards room,” he added, pointing out the mirror above the fireplace — one of 10 throughout the house, three still used — that was cracked many years ago by the heat of twin kerosene lanterns.

The cracked mirror was left as a marker of history, and the lanterns still rest on the mantel.

Then there are the Edwardian-style chandeliers in the front foyer: Mr. and Mrs. Alfred Russell, who purchased the house in the 1940s after it had fallen into disrepair following abandonment during the Great Depression, bought them from the Elks Lodge in Suffolk when it was slated for razing.

Carpets and the kitchen chandelier came from the John Marshall Hotel in Richmond.

The house is built with two-by-10-inch lumber, heart of pine floors and oak trim. The main staircase to the second floor features turned rails and solid oak newel posts, and most windowpanes are original poured glass.

The 2 ½-acre grounds feature old crepe myrtles, oaks, and black walnut and tulip trees. One American elm is thought to be more than 200 years old.

An in-ground pool has been installed where a horse barn once stood, and detached buildings include a “patio house” and two-storey apartment.

The house faces what used to be the town center of Everets, a community whose decline roughly started with the Lake Burnt Mills Reservoir in the 1940s, and was hastened by the Western Branch Reservoir.

When Capt. Saunders built the home, Everets was a stop along the shipping routes to and from Suffolk.

Aboard barges, Saunders was said to have transported crops including watermelons and potatoes to the railroads in downtown Suffolk.

“This is a detailed and amazing piece of 19th-century craftsmanship,” Lee Cross said. “There’s not question that it’s an extremely unique opportunity.”