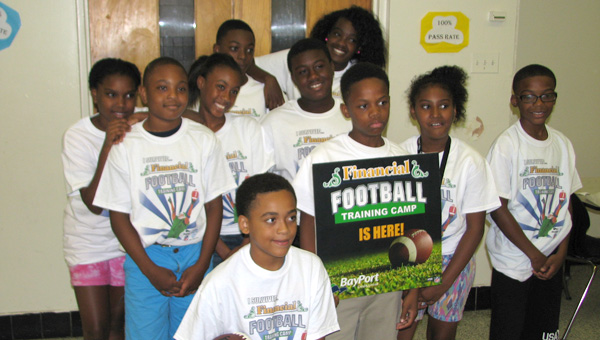 The financial football team from the Boys and Girls Club Suffolk Unit celebrates on Friday. The team competed against a unit from Portsmouth in the game, a program by Bayport Credit Union.

Two football teams passed and rushed their way down a virtual field at the Boys and Girls Clubs Suffolk Unit on Friday.

But it wasn’t an ordinary football game — they were testing themselves on financial concepts in the process.

The students, ages fifth through eighth grade, had spent the previous part of the week learning about personal finance from the team at Bayport Credit Union. The course covered topics such as income and expenses, budgeting, the importance of saving, credit and debit cards, phishing schemes that could steal their personal information, small businesses and more.

Reggie Carter, director of the Suffolk Unit, said the information is “critical” for the young people who, in eight years or less, will be getting credit card offers and thinking about financing their college education.

“It’s preparing them for their future,” Carter said. “They need to start to get good financial principles.”

At the end of the four-day course, the students split into two teams — one from the Waters Unit in Portsmouth, and the other from the Suffolk Unit — and played financial football.

However, an incorrect answer gave the team on defense a chance to answer correctly, which could result in a loss of yardage or a turnover.

It’s a fun way to make sure the kids have absorbed some of the concepts, said Kris Moore, a youth educator with Bayport.

“The earlier that the kids learn about financial concepts, the more prepared they’ll be to make sound financial decisions,” Moore said.

She said the students were especially enamored with the concept of compound interest. They saw the difference between what two people who saved the same amount each month — one starting at age 15 and the other at age 35 — would save through the end of their lives.

“They looked at compound interest and why they should put the money away sooner,” Moore said. “The sooner you start, the more money you could have.”

Juwon Dildy, 12, said he learned the importance of saving money.

“You can save it for when you need it, like for college.”

Desmond Steele, also 12, rattled off all the things he learned.

“I learned about how to save money and handle expenses,” he said. “I learned that credit is not paying until later, and debit is paying now. I learned that your rent is a fixed expense, because the cost is always the same.”