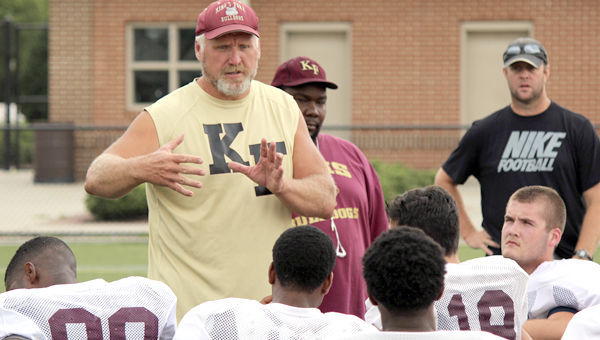 King’s Fork High School’s Bulldogs were among the area football teams to get a taste this week of the season to come during the Bobby Wilder football team camp, held July 21-23 at Old Dominion University.

“We’re excited because it’s the first time we’ve been over here for this,” KFHS coach Joe Jones said. “I’ve got to admit that Dave Waddell, our defensive coordinator, came over here a time or two when he was at Deep Creek. He tried to talk me into it and he succeeded this year,” said Jones.

“You can’t get the players together enough to build that team unity and camaraderie. Plus, there aren’t a lot of three- or four-day college football camps anymore. Most of them are one-day camps and evaluation camps, and if you can find them, they’re $400 to $600.”

Sporting new gold helmets and a maroon facemask at ODU, King’s Fork featured many of the components from the 2013 team that won a school-record nine games and upset perennial powerhouse Phoebus in the playoffs. With that in mind, the team’s goal is to go win a championship.

“It’s more realistic and legitimate now,” Jones said. “I told folks the first couple years when I got the job that I believed that we could contend at some point for the state championship. The last two years have been great. We try not to dwell on last year, but we want to use it as momentum from the fact that we can go out and play with anybody.”

Best of all, the numbers are stronger than ever before.

“We’ve got a lot of kids coming back and have had our best off-season workout participation that I’ve ever had as a head coach, with 22 seniors, 25 juniors, 21 sophomores and 26 freshmen on the list. By the time we start Aug. 4, I’m expecting 80 or 90 for sure, and might even hit 100.”

At the camp, the Bulldogs were without some key players, most notably running back Deshaun Wethington, a rising junior who ran for more than 1,000 yards last season, and senior TyQuan Weston, who holds an offer from James Madison. They have a host of weapons around those two in ODU commit Kane Miskel, Duke Santora, Camryn Little, Trelen Cox and Tony Mayfield.

King’s Fork is breaking in a new triggerman with quarterback Uriah Adams gone to Hampton University. Junior Ryan Kluck, up from junior varsity, will vie for the position against junior Terry Tubbs and senior Keon Ross, a transfer from Ohio.

Gone on the offensive line is left guard Marquell Hart, who went to Bluefield College in West Virginia. However, Jones feels they have “good depth” on the line with four starters returning as well as four sophomores that have quite a bit of upside by the coach’s estimation.

On defense, Notorious Brown, the team’s leading tackler a season ago, returns at inside linebacker for his junior season. He’s one of seven starters back defensively. Miskel, Weston and Akil Freeman highlight a defensive backfield that figures to be among the most talented in the area.

“On paper, we’ve got a lot of experience coming back, and we’re supposed to be good. But as I tell them, paper is paper. It can be torn up easy. That can be torn up on the field easy,” Jones said.

Jones and the Bulldogs open their 2014 season at home on Aug. 29 against Deep Creek.