An adventurer will carry leatherwork created in Suffolk across the steppes of Mongolia when she sets out in the world’s longest horse race.

The intricate work of Miguel Aguilar, owner of The Saddle Barn on Pruden Boulevard, was discovered by 32-year-old Rose Sandler on Instagram.

“I called them up one morning, and I decided to come and visit because it’s (Aguilar’s work) really cool,” Sandler, of Culpeper, said. 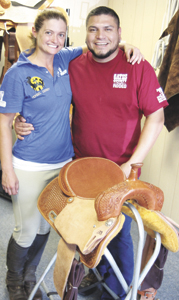 Adventurer Rose Sandler and Miguel Aguilar met in Suffolk on Wednesday at Aguilar’s business, The Saddle Barn. The leathersmith is creating Sandler some items she’ll carry with her across Mongolia while competing in the world’s longest (and reputedly toughest) horse race.

Aguilar says he’s been a leathersmith essentially “my whole life,” and is the third generation of his family to practice the art.

Born in the Mexican city of Guadalajara, his family moved to Texas in 1995, when he was 14. He opened the Suffolk shop a year ago.

Aguilar said he learned the rudiments of leather carving “at my dining table,” but “my real, real training was in Texas.”

Before Sandler leaves for the Mongol Derby next week, Aguilar will create a belt and pouch for her that she’ll wear during the 10-day odyssey.

The items will be auctioned for Central Virginia Horse Rescue upon Sandler’s return.

One item Sandler will carry in the hand-worked pouch is a vitally important one; Derby riders must rely on a GPS as they spread out across the countryside.

“When I get to Mongolia, they give me GPS coordinates of the horse stations,” Sandler said. “They also load a map of the terrain. That is my navigation.”

Riders, who are supported by teams in Jeeps, change horses at stations about every 25 miles. There are 46 riders this year, Sandler said, including five members of the Queen of England’s mounted guard.

The Pennsylvania-born Sandler, who earns a living as an aerospace engineer, has been an equestrian enthusiast from a young age. But the derby will be her first endurance race.

Sandler’s adventures have included a stint living aboard a dive boat on Australia’s Great Barrier Reef and ice climbing in Patagonia.

“I will try just about anything once,” she said.

The Mongol Derby, which recreates Genghis Khan’s postal route, started in 2009. Sandler said she applied for it when a friend contacted her about the event in November.

“I applied, and was accepted,” she said, but there were no spots this year. She was told she would have to wait until 2015. “(Then) a project I was on came to an end, and a week later they called me and said there’s a spot.”

Aguilar has some work ahead of him to get Sandler’s belt and pouch ready for her departure. “I have three days,” he said, surrounded by intricately-carved saddles and other tack.

“But I work big hours already. Sixteen to 18 hours a day, sometimes. It’s going to be just a regular day, I think.”

Sandler plans to blog during the race at www.whatthehellisrosedoingnow.com, and is raising money for her latest adventure at www.rose4mongolderby.com.